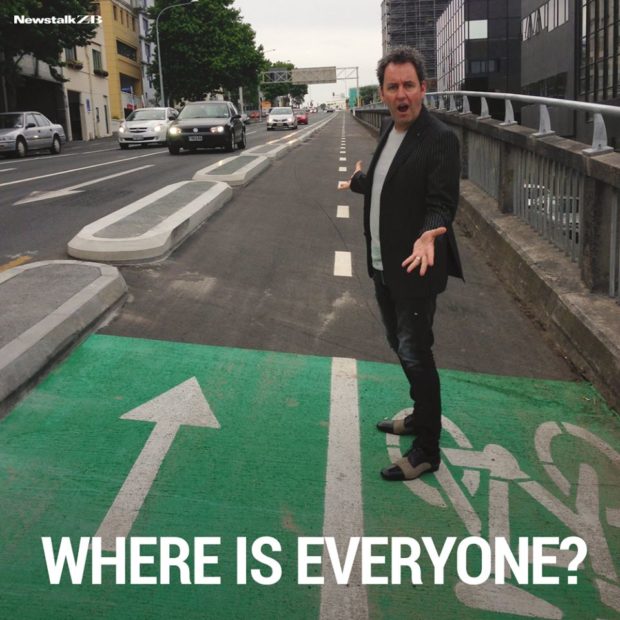 Hot on the heels of Cycle Wellington’s tactical urbanism this week in Adelaide Road, Wellington City Council has bowed to public pressure and voted for the largest of four cycling budget options of $240 million over 10 years. This is as big a win as it gets, and actually has nothing to do with the collapsed “Let’s Get Wellington Moving” cross-local government effort.

This critical vote took emotional pleas in submission before their budget to turn the tide, and plenty still arguing that the overwhelming surveyed majority of Wellingtonians don’t want to support cycling.

More generally, cycling across New Zealand is a tough sell even within urban areas.

But there is only one way to confront and defeat our common addiction to the combustion engine, and that’s through unified public protest that bends public budgets.

The contest against our planet-killing oil addiction can’t just be left to high-end professional advocates taking down major corporates in court.

Sometimes, as in last week, Big Oil wins in the United States Supreme Court as they seek to expand the scope of arguments and essentially play for more and more time. Which the planet doesn’t have. So this ruling enables them to go back to the lower 4th Circuit court and keep grinding the greenies down.

Other times they lose. This week Royal Dutch Shell faced upheaval in their business after the district court in The Hague ruled that the company is partially responsible for climate change and must reduce its emissions by 45% by 2030, compared with 2019 levels. What they are faced with to curb emissions includes selling assets, rethinking exploration spending and halting growth of liquefied-natural gas operations.

That target – called for by the environmental grou[s that brought the case, is in line with the United Nations guidance for members states aimed at preventing global temperatures rising more than 1,5 degrees Celsius above pre-industrial levels.

Every time we chose to fill up our car with petrol or diesel we are pouring profit into the bank accounts of multinational oil companies.

Every time we fight City Hall and turn their budget towards cycling, we decrease the number of times we pour that same profit into their bank accounts.

Beyond the stupendous scale of such courts, the same fight is here, locally, in our face to win.

This Sunday Aucklanders have an opportunity to protest the catastrophic failure of NZTA to generate a cycleway from the North Shore to the CBD, and to promote a practical proposal to “liberate a lane” on the Harbour Bridge which would do the job in the meantime.

If you think what’s proposed is impossible, the BikeAuckland people are saturated with highly qualified engineers and planners who keep Auckland Transport on their toes. Their charismatic leader Barbara Cuthbert is a qualified planner, and as she did with John Key, she advocates and she wins on a major scale.

We already know it’s possible to “liberate a lane” because every year the Auckland Marathon takes over a third of the bridge for most of a day.

Cycling civic politics is not in the standard lexicon of old-left issues: it’s the contest that is not specific to left, right or green politics, and these wins and protests are part of its sure rise.

And Auckland, see you there on Sunday.