Jenny looks at extending public transport to include cyclists

This Sunday Aucklanders have an opportunity to protest the catastrophic failure of NZTA to generate a cycleway from the North Shore to the CBD, and to promote a practical proposal to “liberate a lane” on the Harbour Bridge which would do the job in the meantime.

Don’t knock local politics until you’ve had to stand up and defend a cycleway in public.

Expecting a bit much aren’t you? We haven’t had that since Muldoon. At least he had them. The kind of people now asking for a plan were those who complained about governments that “interfered with the sacred ‘free market’” and screamed about “central planning”, “picking winners”, “protectionism” etc. They prefer just getting cheap labour to give the illusion of economic growth. And build a cycleway!

The Standard has obtained an internal memo from CTF Partners (formerly Crosby Textor) where it responds to allegations that it is a kindergarden for the rich children of Conservative Party donors, has engaged in misogynist behavior and ran anti and pro cycle astroturf campaigns to get a cycleway moved from near a client’s business premises to near an opponent’s premises.

On my reliable commute and dipshits like Mike Hosking

Traffic and parking in Auckland isn’t helped by ignorant conservative dipshit parasitic immigrants like Mike Hosking.  They really don’t get how this city can’t just keep adding roads as the roads backup after accidents. Or why it is so much safer for ratepayer cyclists to not have to contend motorists trying to accidentally kill them.

National has taken to criticising the Government for not building roads that had no coherent business case and no proposal to build.

National’s roads of national significance programme looks to be no more with an early casualty being the East West Link in Auckland, which per kilometre was destined to be the most expensive transport project the world has ever seen.

The Green Party will save families and students money, reduce pollution, and make it easier to get around Wellington.

Key to Homeless: You Can Stay at Mine

Prime Minister John Key has today announced a radical plan to solve the housing crisis. The homeless are now welcome to go flatting with him in his Parnell bach. The plan includes draining the swimming pool and subdividing it into flats, putting hammocks in the palm trees and making soup in the pool cabana’s kitchen. Max Key may have to move out to make way for the homeless, but the PM described that as a painful sacrifice he was now willing to make in the light of his son’s most recent social media posting.

John Key’s great idea for job creation – his cycleway project – has produced some benefits, but is a patchwork production.  Some sections will be user pays to fund maintenance.  Meanwhile the job creation benefits have been limited.

Every other political party has said an emphatic no to National’s proposal to override the Commerce Commission’s reduction in broadband charges.  I suspect that  Cabinet and Chorus’s board are not having a very good day …

It’s UN Global Road Safety Week, with a focus on pedestrian safety. NZ statistics for pedestrian injuries and deaths are sobering.  Children are especially vulnerable to careless driving practices. In the interests of our people and environment, walking and cycling need to be less dangerous, and more fun.

Just before the parliamentary recess National released its latest set of Laura Naude targets.  They will join all the others – catching up with Australia, jobs from the cycleway, government surplus by 2014, yadda yadda yadda. I can’t think of a single target National has actually met. These targets aren’t real; they are just there to provide fodder for uncritical media. 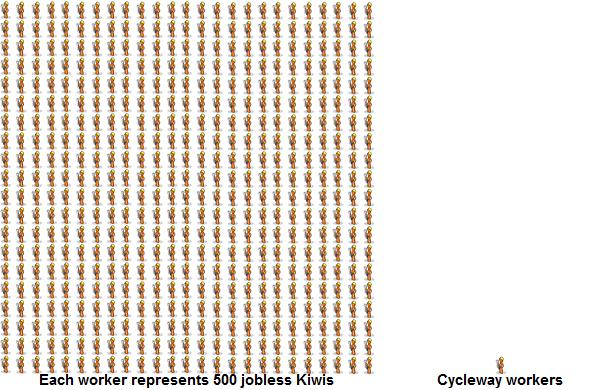 Prime Minister John Key has reacted to growing fears that the world is slipping into a second round of financial crisis and recession before it has recovered from the first one by boldly opening a 180km cycleway through the King Country. Part of a $50m cycleway project, it is expected to boost the economy by $5-$20 quadrillion, according to the PM.

National cause of dire economy

National still seem to be getting a lot of cover for their economic mismanagement from the Global Financial Crisis way back in 2007-2008.  But New Zealand’s failure to be “roaring out of recession”, as John Key promised, is no longer tied to the GFC.  It’s Bill English and National’s economic policies that mean that the government deficit is pushing the limits with no reward for average kiwis.

Spinning while the economy burns

The latest GDP figures are awful. the Reserve Bank had predicted 0.9% growth in the June Quarter. It came in at 0.2% – far worse than anyone expected and slower than population growth. The Key Government’s reaction? Deny there’s a problem and spin, spin, spin.

Prime Minister John Key today conceded that growth remains too weak, unemployment is too high, and that it is unacceptable that workers’ wages are going backwards when he promised they would match Australia’s in just 15 years. Speaking to a rapturous crowd of schoolchildren and journalists, Key announced a bold new economic agenda.

After 15 months, just 10km of the 2000km John key Memorial Cycleway has been built at 3 times the budgeted cost. I’d like to see Goff take Key up on his offer of a ride on his recession-busting national cycleway. They’d be done in half an hour. Key’s flagship policy was always a joke and, now, everyone’s laughing. Come next year, voters are going to look at this record and say ‘on yer bike, John’.

No progress on Key memorial cycleway

I love that John Key is so desperate to show some progress on his memorial cycleway that he’s even going along to the opening of cycleways that aren’t funded with its money. On Sunday he showed up at the opening of a cycleway in Oamaru. The cycleway was funded by the council and NZTA. The recession has been over for a year – not a single job has been created, no cycleway built.

We received this guest post about half an hour after John Key announced his cycleway. At the time, the very sensible criticisms it raises were ignored by an enamoured media.

How prescient it looks now, on the anniversary of the Prime Minister’s Jobs Summit.

Nearly a year ago, John Key, shaken by the first whispers of disquiet over his government’s month-long holiday at the height of an economic crisis (whispers that would later grow into cries of ‘Do Nothing’ Key), decided to hold the Prime Minister’s Jobs Summit. This would not be a talk-fest, it would be a ‘do-fest’ […]

Anyone with a brain has always known Key’s cycleway is a joke. The sick thing is he’s now using it as a punchline himself: Barack Obama’s planned White House Job Summit struck a note with our own PM when he heard about it during the Singapore Apec meeting. “Maybe he’ll do a national cycleway,” John […]

As Irish has already noted, Fran O’Sullivan has savaged John Key’s record on employment and said that Paula Bennett is “too busy puffing her own achievements to pay much heed” to warnings on the dire long term-effects of high youth unemployment. What caught my eye was her quote from Key at the start. President Obama is looking for ways […]

The Greens have announced the collapse of the cornerstone of their Memorandum of Understanding with National. With Gerry Brownlee as Minister for Energy, National hasn’t only failed to make progress on energy efficiency and conservation, it is taking illogical, retrograde steps. So why are the Greens continuing to provide greenwash for this government? I’m thinking about […]

I’m all for cycle-ways but excuse me if I don’t get all silly over John Key knocking a post in the ground in Waikato and declaring his first cycle-way under way. The reality is the Waikato River Trail was being built anyway. In fact, it is already over half built. So this $3 million isn’t actually creating […]

This just in: A picture of stage one of PM John Key’s personal solution to NZ’s recession – the cycleway to nowhere! OK, just kidding. It’s one of the images from The Guardian’s photo show on “Crap cycle lanes”. View them and weep, fellow cyclists… (If you want a political angle to haggle – how […]