Drill baby drill will not work 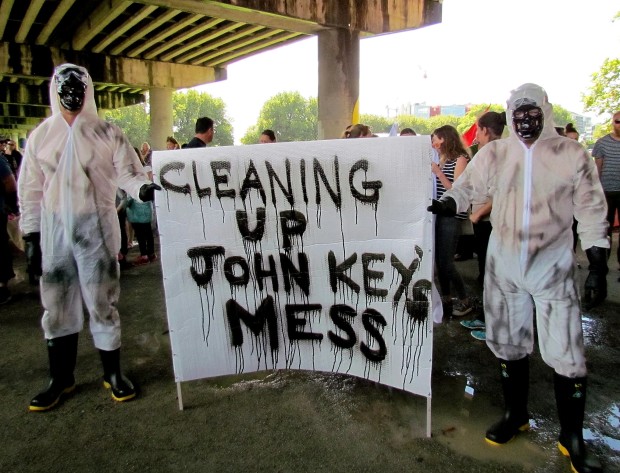 In a world where climate change threatens our civilisation’s existence and where the plummeting price of oil means that even the most accessible wells are struggling to be price competitive you would think that a sensible government would refuse to allow deep sea oil drilling in a fragile ecological area which is home to one of our most threatened mammals. But this Government wants to allow it.

Simon Bridges is the latest Government cheerleader for the Oil Industry. In perfect Crosby Textor speak he says that while the world must progressively transition towards a low carbon future, it can’t and won’t happen overnight. Dickhead. With every tonne of CO2 or Methane pumped into the atmosphere the possibility of cataclysmic environmental damage increases. People such as scientists who actually understand the science think that we are beyond the point of no return. Having Oil Industry cheerleaders like Bridges in power sucks big time because they only delay the imposition of measures that are absolutely urgent.

His speech to the Oil Industry barons is full of double speak, like how New Zealand has a “mixed and balanced approach to our energy future, which sees us pursuing opportunities in both renewable and non-renewable energy”. This is like a diabetic religiously eating celery but balancing it by eating twinkie bars. The net effect is all bad.

He celebrates that the country is a world-leader in geothermal energy, has world-class wind generation, has extensive hydroelectricity, and abundant forestry resources. Funny that the vast majority of the wind generation was developed because of the last Labour Government and the other aspects all depended on progressive governments for them to be advanced.

Bridges is no stranger to climate change doublespeak and obfuscation. Trying to get him to admit recently in Parliament that CO2 production has increased by 20% between 2008 and 2012 resulted in the most ridiculous avoidance imaginable. And speaker John Carter has not helped. As you can see from the video he repeatedly interrupted Russel Norman in his attempts to get Bridges to admit that what he previously said was wrong.

Norman has had the Green Party research unit examine the length of the questions that he asked compared to other questions asked that day. They came up with clear evidence of bias on the part of Carter:

The sad thing is that Bridges and National appear to be totally unaware of the urgent need that we do something and we do it now. And apart from drill baby drill, a convention centre reliant on the misery associated with increased problem gambling and flogging off our assets to the wealthy there does not appear to be any plan to improve the economy, let alone a coherent plan.

There is some good news about climate change, at least sort of.  Last year the rate of increase in the production of greenhouse gasses stalled. The amount of GHG in the atmosphere still went up but at least it is not going up by more and more each year.  And this happened despite oil prices crashing. Maybe this is the start of a turnaround.

It is thought that the slow down of growth in China and its reduction in the burning of coal combined with the reduction of GHG production in the European Union is the cause. But we need to do more.

Even the UK Conservative Energy and Climate secretary Ed Davey understands the problem. He recently said this:

These figures show that green growth is achievable not just for Britain but for the world. However we cannot be complacent – we need to dramatically cut emissions, not just stop their growth. Getting a new global climate deal is absolutely vital, and the year ahead is going to be of critical importance.

If cutting emissions is your goal then allowing the drilling of expensive oil wells in pristine deep sea enviroments is the definition of madness.

25 comments on “Drill baby drill will not work ”