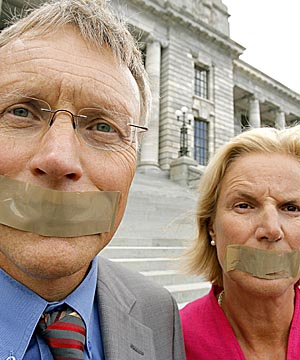 The latest in a long line of failed protests on the Electoral Finance Act has ended badly with Steven Franks taking legal action against 3M, the maker of Packfast packing tape.

“Aspiring Wellington Central MP Stephen Franks was one of six demonstrators protesting against the Electoral Finance Act who were thrown out of Parliament’s public galleries yesterday… Mr Franks was accompanied by his wife, Catharine, and John Bescowan at the demonstration… Their mouths were covered with packing tape.”

Problems arose when it came time for the brave protesters to remove the tape. Reports suggest that the adhesive backing had reacted with excess saliva in such a way that it has permanently adhered.

We did a quick poll in Cuba mall this morning to see how electors in Wellington Central felt and it’d be fair to say that reaction was overwhelmingly positive.

We know that Stephen can be, well frankly, a bit of a dick so we asked Catharine whether she thought the up-side to this sticky situation might be increased marital harmony.

She seemed reluctant to say too much, merely adding “Mmmmvphh, phofffmjjj”. A translator tells us that what she appeared to be saying was “yes, and this should help save on lipstick too”.