Flat as a pancake

The economy grew just 0.2% in the December quarter, enough to avoid the technical definition of recession but did it feel like that for you? No. It felt like recession because the economic pie grew slower than the population. National’s economic record is GDP per capita 5% below its peak and down another 0.6% between March and December last year.

For an illustration of National’s total failure to improve the economy, we only need to compare their record on GDP per capita to Labour’s: 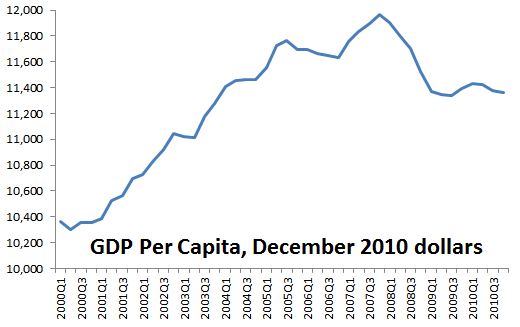 We’ve flat-lined under this lazy, elitist government. And what the GDP stats don’t show is that an ever-increasing share of the cake is going to the few at the top.

The second Christchurch earthquake and the oil/food price spike will obviously make this current quarter much worse but we might still ‘technically’ avoid a second recession because it’s only a recession if the June quarter is even worse than the March quarter, which will be a hard ask. that, of course, just says more about the limits of the definition than reality.

The Great Recession began in 2008 and, despite a small positive quarter or two here and there, we haven’t even begun to regain what was lost. Nor, with serious economic problems besetting us and a government that refuses to acknowledge, much less act to mitigate them, do things look like improving any time soon.