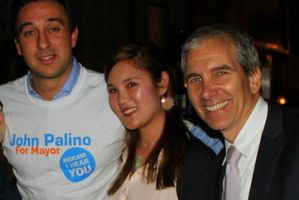 Remuera branch meetings of the National Party must be fun events these days.  John Palino has all but confirmed that he is going to give the Auckland mayoralty another run and if the rumours are correct his campaign manager will be the one and only Simon Lusk.

From Rebecca Wright at one news:

John Palino is standing to be the Mayor of Auckland.

He will make the announcement next Monday at 2pm at his new cafe, Friend of the Farmer in Takanini.

I know this because the man himself just rang me to let me know where and when he will be declaring.

I’ve also spoken to several people Palino has approached to be part of his campaign, all of whom – without exception – have run a mile.

She followed it up with this update.

Lusk is an ally of Whale Oil blogger Cameron Slater and a central figure in Nicky Hagar’s book Dirty Politics.

On his website Lusk says “he believes that the amateur nature of politics in New Zealand means that spending money and professionalism can win campaigns”.

John Slater is not involved at this stage.

Cameron Slater has rubbished the idea without offering any further information.  Time will tell.

Victoria Crone must be wondering what has happened to the famed National Party discipline and Mark Thomas will have an interesting eight months travelling through the city all to no avail.  Palino’s inclusion will make what already appeared to be a very likely outcome for Phil Goff into an almost inevitability.

The announcement raises all sorts of questions: