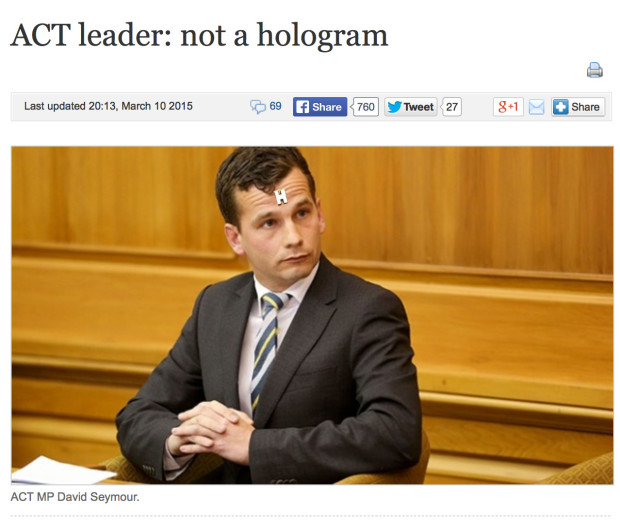 Yep you read this right.  David Seymour has gone on the offensive and has claimed that ACT is more of an environmental party than the Greens.

ACT leader David Seymour is readying to fire shots across the Green Party bow, accusing them of “socialist economics” and neglecting the environment.

He said they also “just really piss me off”.

First example of supposedly random use of invective there to make him look tough.

The rank and file behind the single-MP party will gather at Auckland’s exclusive Orakei Bay this weekend for their annual conference, which is expected to carry a heavy environmental theme.

It’s unclear exactly what that will include, but is expected to centre on Government incentives to increase private environmental custodianship, and moves to better define ownership.

Seymour was keen to boost the party’s environmental credentials, saying they had gone under-reported in the past.

ACT’s environmental credentials were under reported because they were non existent.  I had a quick look at the website and discovered that amongst their principles was one to “[p]rotect our natural and built environment with Smart-Green policies”.  Go those smart green policies.  Who could disagree?

I then thought I would check on their climate change policies.  Surely in these post COP21 days even ACT would believe that climate change is a reality and we need to do something about it.  But the results of my search were disappointing … 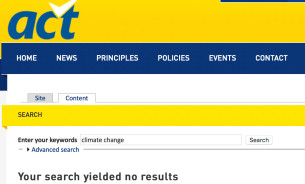 The only environmentally related policy I could find was one on RMA reform.  And it suffered from the unfortunate feature that it was gibberish.  Read it for yourself and see if you can make sense of it:

ACT believes that the Resource Management Act is a case study in poor regulation, with major economic impacts.  If red tape and regulation is the most urgent reform area, then the RMA is the most urgent piece of legislation to reform.  It is beyond redemption by small changes, in fact much of its current deficiency is the result of two decades worth of attempts to improve upon a base of fundamental flaws.  Specifically, the RMA does not seek to remedy clear market failures, but rather introduce a central planning approach to the use of resources.

ACT will rescind the RMA. It will be replaced by the restoration of a greater role for common law actions and remedies.

ACT will set up an expert taskforce to determine what planning laws New Zealand does need relating to public goods, such as flood control, border protection and problems of non-point source pollution.  Any new law will start with the premise that protects private property rights and makes property owners liable for any nuisance they cause.

The english teacher of the person who wrote this would justifiably right now be hanging their head in shame.

But apparently it is time for ACT to boldly step out and claim the mantle of being the environmental party while at the same time chipping at the Green Party.  Again from Stuff:

“They have squatted on this piece of political real estate, while doing bugger all for the environment and often doing things that are counter-productive, because they don’t understand markets.

“They annoy me enormously, and I just think it’s wrong because I actually do care about the environment and I think it’s an important part of being a New Zealander,” he said.

“What you’ve got is a group of people who are actually running a completely separate agenda which is socialist-economics, and neglecting [the environment].

“The reality is they just piss me off.”

Cue further testosterone driven comment from Seymour.  And question how the Greens, who have regrettably always been in opposition, could achieve more.  Maybe they should find an electorate which National is willing to cede and promise unswerving loyalty just so that they can be a miniscule part of a government.

The Green Party leadership declined to comment.  Obviously they have better things to do than address idiotic claims.  But an anonymous spokesperson said this:

ACT seems to be claiming some kind of road to Damascus epiphany that the environment is worth saving.

“David could start by supporting our call for a moratorium on further dairy conversions on the Waikato River to help make it swimmable again.”

As an example of ACT’s green creds delegates can book a ride in a high powered Tesla sports car that can outpace most high-performance sports vehicles.  They clearly do not understand the concept of sustainability.

Other speakers will talk about child poverty, the Government’s position on superannuation and victim support.  The sense of spin is high.  All parties wish to address these issues which clearly focus groups say are important.  They just have different solutions, so can’t we all just agree that it is all about the kids?

There is nothing like a saying something stupid to get some social media blowback to happen and get some publicity. Much as I enjoy social media the cynical creation of clickbait and pseudo controversy is one of its less appealing features.

72 comments on “David Seymour thinks ACT is the environmental party ”