Get rid of the fool. 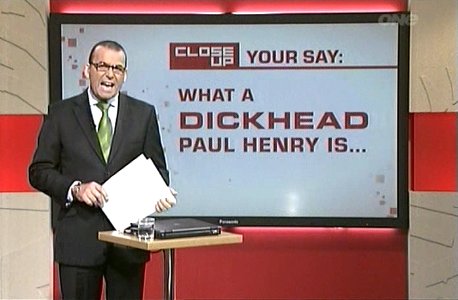 I haven’t bothered looking too far for reaction to Paul Henry jerking off in public to attract attention to his personaility defect – inflated ego. Against the current had a post that captured my opinion the best – Meet Mr Stupid.

This time the victim of Henry’s ‘witty banter’ was British singing Susan Boyle.

Henry thought it would be really entertaining if he referred to Boyle as a ‘retard.’

He described her as being ‘starved of oxygen at birth’. Gosh, that’s so incredibly funny and insightful. Who knew that Paul Henry was Oscar Wilde in disguise?

Of course this is yet another dismal example of Henry and his best friend – his ego – showing off for the cameras. Henry thinks he’s ‘entertaining’ – everyone else just thinks he’s a right wing prat. Except for fellow right wing loony Lindsay Perigo. He adores him.

Yeah, so you can tell the quality of a person by that of their ‘friends’. I have no doubt that the mob down at the sewer thinks it is funny and will probably start immediately telling me that I should get a “sense of humour”. All I can say is that if you don’t understand why this bozo is going beyond the pale in the pursuit of ‘news’ ratings, then you have a serious problem in your personality.

If he was doing it in a stand-up comedy it might be humorous. On a moderately serious ‘news’ program the f*ckwit just makes TVNZ look like they operate out of a sleazy 1950’s comedy club.

AtC sums up with

Paul Henry. What a man. What a hero. What a wanker.

Brian Edwards says pretty much the same, but with more restraint than I can be bothered with.

I’m about to criticise Paul Henry whom I defended in the very first blog which I published on this site. My thesis was that, despite his occasional gratuitous, offensive and personally hurtful comments about other people, his exceptional talents as a broadcaster justified his continued employment by Television New Zealand. That is no longer my view. Henry is a bully who is abusing his position as a public broadcaster. He should be sacked.

Hosting a television programme endows the presenter with considerable power. And with that power goes the responsibility not to abuse your position by disparaging those with less power and less opportunity to respond.

Henry seems unaware of that responsibility. He responds to criticism with the crass bluster, so typical of the bully:

â€˜To be honest, this is water off a duck’s back to me There’s a question of free speech here I’m just saying what’s on my mind, what I think, I’m trying to be entertaining.’

And there you have the real issue: not freedom of speech which can never be unlimited in a civilised society, but the freedom to increase your ratings and advance your career by tapping into the deep-seated prejudices of your audience.

Personally I prefer to think that it is the fault of TVNZ for thinking that a pinhead with a attention seeking personality defect is suitable for presenting any news. Watching his slow progression into thrall-like addiction to his bloated ego must, for viewers, be like obsessively watching a show about nothing. Sort of a reality show with a showoff scrabbling for prizes.

TVNZ – just get rid of the fool out of your ‘news’. He is just going to get worse and eventually will drop you into a court case that you will lose. Sure you signed a contract. But I bet that there is dropout clause for f*ckwit behavior by a retarded ego damaging the show. He has given you a lot of ammunition for court if he is stupid enough to go there for any type of unjustified dismissal.

But thats just me being light hearted and ‘funny’ – ha ha…… yeah right.