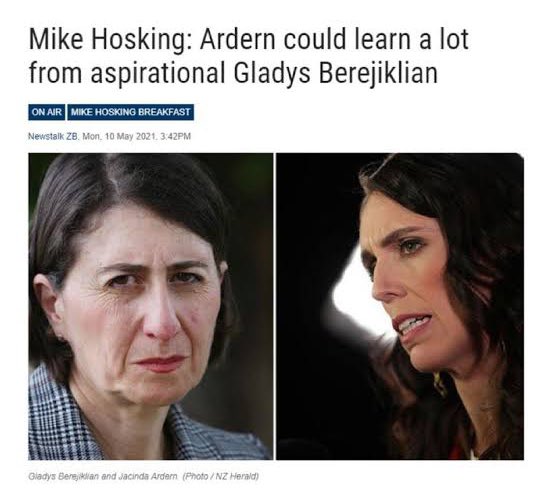 She was something of a go to politician for Mike Hosking, desperately seeking for a right wing version of Jacinda Ardern who he could hold up as being better.

In particular he triumphed New South Wales insipid version of a lockdown and its placing of business interests above health advice.  The result is plain to see, Covid is now rampant in New South Wales and there is no way back.

This graph shows how important the intensity of the lock down is.  New Zealand still has a chance of containing the latest outbreak, Victoria at the same stage was struggling but even then for New South Wales it was all over. 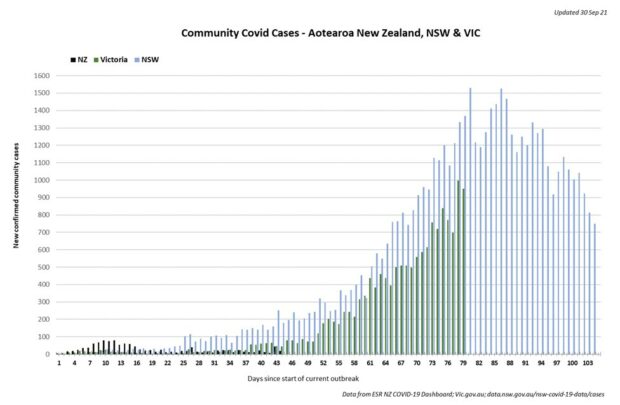 Hosking could have chosen Annastacia Palaszczuk to hold up after all Queensland’s Covid response is after all very good.  But there is one problem.  Palaszczuk is a Labor Premier.  Hosking’s bias is so pronounced.  That he continues to be able to spread his disinformation shows how ideologically biased a large part of our media is.

Berejiklian’s fall was utterly predictable and it was only a matter of when.  The Independent Commission against Corruption yesterday formally announced that it was investigating her involvement in grants handed to the Australian Clay Target Association in 2016-17 and the Riverina Conservatorium of Music in Wagga Wagga in 2018.  Her long time with disgraced former Wagga Wagga MP Daryl Maguire is the cause of the problem.  The ICAC had previously recommended charges be considered against Maguire for possibly giving false evidence during its inquiry into his actions in attempting to use his position as a parliamentarian to secure property deals for companies he was representing.  His association with Chinese Businessman Jimmy Liu, whose company allegedly swindled vast sums from Australians and became embroiled in a devastating international fraud did not help.

It is mind boggling the level of corruption that happens in Australian politics.  And it is unbelievable that Hosking should champion someone who not only was bad at her job in handling Covid but was so compromised.