The Children’s Commissioner has warned action needs to be taken, or New Zealand risks relegating a third generation of children to a life of poverty.

More than 8 percent of children were in severe poverty. That meant 90,000 children experienced both material hardship and lived in a low-income home.

While child poverty was reasonably stable for several years, it was significantly worse than the 1980s.

In 1982, the percentage of children in families experiencing income poverty was 14 percent, compared to 28 percent now. …

New Zealand’s child poverty rates aren’t improving but we are starting to “wake up to the serious problem”, according to the 2016 Child Poverty Monitor.

The monitor, released on Tuesday morning, shows there has been no real improvement in child poverty rates.

“New Zealanders are starting to wake up to the serious problem we face. We are in real danger of creating pockets of a third generation of ingrained poverty – which seriously impacts children’s health, ability to learn and contribute to society.”

New Zealand has a goal to halve all poverty by 2030.

“To attain this goal within the next 14 years, we need a plan to reduce child poverty. It must be a government led plan all New Zealanders can work towards. It should involve business, community and non-government groups.” …

Children’s commissioner Judge Andrew Becroft says he was “shaken” by the 2016 child poverty monitor, the first to be issued since he took the advocacy role.
…
Judge Becroft told the Otago Daily Times he will ask new Prime Minister Bill English to set a poverty reduction target, a request that was knocked back by former prime minister John Key.

Judge Becroft, who has been in the role for five months, hopes to have more success with English. … Key had said it was too difficult to set a specific target. …

So now we get to see what Bill English is made of. There have been many gushing words from certain commentators about his “compassionate conservatism” and the wisdom of his “social investment” approach. Now he’s in a position to act, to start addressing the Nats’ so far shameful record on poverty. So, what will Bill English’s government do about poverty – evasions, words, or actions? 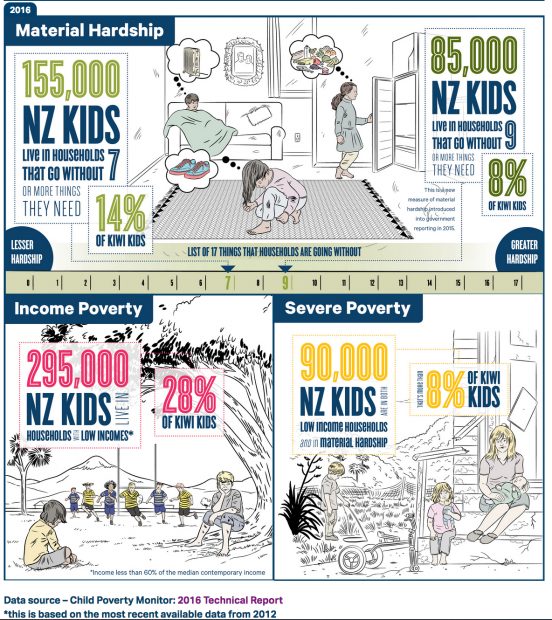 Everyone else is wrong and Bill English is right about child poverty apparently. #nzqt #nzpol

So much for change of attitude to "share benefits of growth". Same old, same old from new PM ignoring pleas of Childrens Commissioner #nzqt