I’ll be heading off to the Dunedin climate march soon. A basic right which is being denied to activists in Paris:

At least 24 climate activists have been put under house arrest by French police, accused of flouting a ban on organising protests during next week’s Paris climate summit, the Guardian has learned.

One legal adviser to the activists said many officers raided his Paris apartment and occupied three floors and a staircase in his block.

French authorities did not respond to requests for comment but lawyers said that the warrants were issued under state of emergency laws, imposed after the terror attacks that killed 130 people earlier this month.

The author and climate change campaigner, Naomi Klein, accused French authorities of “a gross abuse of power that risks turning the summit into a farce”.
…
Joel Domenjoud, a legal activist, said that he had been served with a restraining order wrongly describing him as a “principal leader of the ultra-left movement” just hours after a judge refused to hear an appeal against the ban on the climate demo that he had petitioned for. …

Since when is believing that we should try and protect the environment “ultra-left”? Isn’t it just, you know, rational?

The action required to address climate change will require all of us, a sense of unity and purpose. Why are the so called leaders meeting at COP21 so afraid of public demonstrations? Those people who want to take to the streets supposedly have the same goals as the conference itself. The heavy-handed overreaction to public demonstrations that has surrounded all of these climate talks is the worst kind of small-minded authoritarianism.

The image on the front page is from the Copenhagen talks… 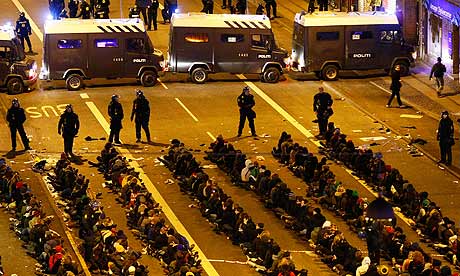