Wow – that was quick! Wednesday morning, the New Zealand Herald publishes Jarrod Gilbert’s exposure of the Police’s totalitarian controls on academic research and freedom of speech. Three days of MSM and Fifth Estate support for Dr Gilbert ensues. By 10am Saturday morning, the Police Commissioner, Mike Bush, is falling over himself on TV3’s “The Nation” trying to explain how its all been a big mistake.

According to Bush, the contracts researchers were required to sign were “possibly fit for purpose at one stage” and that the intent of the controls was to protect the privacy of individuals.

ORLY? “Possibly? At one stage? To protect New Zealanders?” Utter bullshit, of course, but probably the best his reduced comms team could cook up at short notice. It was probably that group within Police which wrote the contract in the first place. Or some National Ltd™ mate got a fat contract to write it. Whatever, its an excuse for the inexcusable.  Predictably, better effort was put into spoon feeding Bush spin lines suggesting the issue was now dealt with . . .

. . . we will be changing the wording of that policy and what it’s about because the frustrating thing is it’s the opposite that’s true in terms of where we’re at at the moment . . . We’re wanting to build great relationships with academia because we are determined to be a very evidence-based police service.

Huh? “The opposite of what’s true now”? Good grief. You’d think the police would already be a “very evidence based” service.  Yet, if that is its current goal, building great relationships with academia is part of a sensible approach. Hasn’t exactly got off to a good start, though . . . 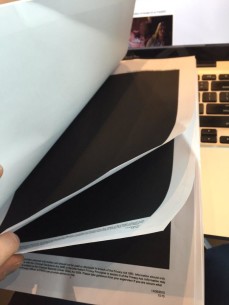 Police response to Dr Gilbert’s OIA request for a copy of its file on him.

Dr Gilbert said yesterday he was optimistic about this announcement of apparent change but, given his experience with the police over a long period of time, he was taking a wait and see approach. Meanwhile, Dr Gilbert remained less than impressed with the performance of the Minister of Police over this affair. Caught just before scuttling off to his hide-out for three days, Michael “Worm Farm” Woodhouse reckoned it had nothing to do with him. “Its an operational matter”, he squeaked, as the Beehive Escape Hatch slammed shut.

In response, Dr Gilbert suggested that “if a minister of police can’t see that this has wider implications, then he’s not fit to be a minister.” <—BINGO!!

Mopping up for National Ltd™,  Steven “The $43 million Dollar Man” Joyce spontaneously blurted out the mandatory Crosby Textor half-truth distraction: but, but, but . . . Labour did it too. Then, in a stunning act of stark hypocrisy, he said  “as Science and Innovation Minister and Tertiary Education Minister I’d encourage [government agencies] to be as open with their data as is reasonably possible.”

WTF!! Joyce is the man who has trashed the New Zealand scientific research community. Container loads of useful data have been thrown out and there’s no one around to explain what’s left.  Thank’s to Joyce, John Key can now say, on the eve of his departure to Paris for climate change talks,  “my scientists advise me we’ll have a solution to agricultural emissions in 3 – 4 years’

There won’t be “a solution” but, amazingly, John Key wasn’t lying. These days, scientists will tell him whatever he wants them to, however fantastic. Particularly helpful is when time lines conveniently traverse election cycles. Steven Joyce ensured all this by using John Key’s personal Bunsen Honeydew to front the gambit and finished off the gagging process last year. By that stage, National Ltd™ could no longer suffer exposure to truth for fear the public might begin to comprehend its consequences.

Now, with hundreds of millions of dollars of public funds for scientific research heading into the hands of corporates and our scientists mostly gagged, any victory for freedom of speech and academic research is worth savouring. It ain’t easy speaking inconvenient truth under National Ltd™, and its made even more arduous when going up against the Police as well. It takes a toll . . .