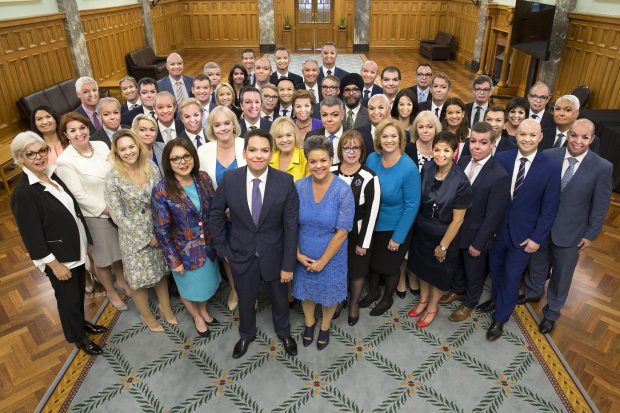 So Judith Collins is now National leader and Gerry Brownlee is the deputy.

Yesterday was a day to remember for political tragics.  At 7:35 am Todd Muller was gone, by 9 pm Judith Collins was leader.

Her initial comments and visuals were to suggest that all is now united in National land.  This is undermined by the leaking that was occurring at the time.  Rather than National having the ability to create a splash by Judith and Gerry appearing from behind the blue curtain details were leaked to the media.  And it was also leaked that Paora Goldsmith had a tilt for the deputy position.

She was interviewed this morning by Corin Dann on Morning Report.

She pledged to retain current caucus ratings.  But Michael Woodhouse is not safe and his future will depend on her diving into what happened.  I suspect within days he may be demoted if not gone completely.

Collins did engage in some good old race baiting by again asking if there was something wrong with being white and then pivoting by saying her husband is Samoan.  I can recall Don Brash doing and saying something similar.

She was asked if she resiled from Dirty Politics and her relationship with Cameron Slater.  She said she did not want that sort of culture any more and said that she had learned from her mistakes.  I wonder how Cameron will respond to his bestie publicly humiliating him in such a cruel way.

She has a couple of lines that she will use ad nauseum.  One is that Labour did not appreciate Ardern before she became leader.  What utter bollocks.  The other is that only National can properly look after the economy.  Of course this has been disproved time and time again.

And she pledged there will be no tax increases and no cuts to health if she became Prime Minister.  I presume this means that cuts to Education, Conservation and Social Welfare will all be on the drawing board.

Of course National still have some major problems ahead.  60 days out from election day it has no detailed policy and no party list.

Judith and Gerry may instil necessary discipline on the caucus.  But all this will do is stem the leaking of support.  They may have saved a few MPs their seats.  But in this fast moving world where future looking leadership is vital Judith and Gerry are as anachronistic as you can get.