Here’s one of my favourite quotes:

The modern conservative is engaged in one of man’s oldest exercises in moral philosophy; that is, the search for a superior moral justification for selfishness.
— John Kenneth Galbraith

There’s no end to the lame arguments that right wingers will advance to try and justify what is basically greed.  David Farrar (quoting Richard McGrath (quoting Daniel Hannan)) recycles a common one – that we would increase the tax take if we lowered the top tax rate.  There seem to be two parts to this argument, first that lower tax rates would lead to less tax avoidance (yeah right) and thus increase government revenue, and second that they would motivate people to work harder and thus “grow the economy”.

The trouble with both of these arguments is that they are bollocks.  In the case of the Farrar / McGrath post they are lazy, dishonest, stupid bollocks and Rob Salmond has all together far too much fun tearing these “poodles armed with noodles” to bits. I’m just going to stick to the boring old facts.

And the argument against this very convenient hypothesis is that in New Zealand in the very recent past we’ve lowered taxes for the wealthy three times in three years and this has led to reduced tax revenues.

Farrar tried some excuses, but fact is the New Zealand case is typical.  Time Magazine sums up (and for further along the same lines see here and here):

If there’s one thing that economists agree on, it’s that these claims are false. We’re not talking just ivory-tower lefties. Virtually every economics Ph.D. who has worked in a prominent role in the Bush Administration acknowledges that the tax cuts enacted during the past six years have not paid for themselves–and were never intended to. Harvard professor Greg Mankiw, chairman of Bush’s Council of Economic Advisers from 2003 to 2005, even devotes a section of his best-selling economics textbook to debunking the claim that tax cuts increase revenues.

Tax cuts don’t cause growth.  Once again we can start with the New Zealand experience.  During the mid 1980s we had major tax cuts followed by years of stagnation, and ultimately, by a recession.  During the last 3 years we’ve had significant tax cuts that were supposed to bring us “roaring out of recession” in an “aggressive recovery”.  Instead we have had anaemic growth and only narrowly avoided a double dip recession.  Once again the New Zealand experience is typical.  I’ve written about this before, but here’s another good summary (or see here):

TAX CUTS DO NOT WORK.

In fact, there have been three grand multi-year national experiments with Republican / Conservative tax cutting over the past century. And all three experiments resulted in the average American becoming poorer, the real (industrial) economy in tatters, and spectacular financial crashes.

In 1981, Reagan significantly reduced the top marginal tax rate, which affects the very wealthy, a from 70% to 50%; in 1986 he further reduced the rate to 28%. Contrary to the Reagan / Republican / conservative argument that the tax cuts would pay for themselves by boosting economic activity the budget deficit and federal debt exploded. Federal government debt grew from 33.3% of GDP in 1980 to 51.9% at the end of 1988. …

Reagan’s tax cuts failed to revive American industry, which was also being hammered by the Reagan / Republican / conservative blind faith in free trade.A number of American industries actually disappeared. By the end of Reagan’s presidency, the American textile, apparel, and footwear making industries had been reduced to less than one tenth the size and sales they had been just two decades before. During Reagan’s tenure, the U.S. lost its trade surplus in consumer electronics, and began to also lose its advantage in industrial electronics. The most important industry of all, the machine tool industry – which is needed to make all other production equipment – slipped into a death spiral from which it has never recovered. Steel, auto, printing equipment, construction equipment, farm equipment, power generating equipment – in industry after industry, under Reagan, the U.S. began to lose its world lead.

Republicans and conservatives of course contend that the two Bush tax cuts created the economic boom of 2002-2006.

… Ferguson stated that excluding the effect of home equity extraction, the U.S. economy grew at a 1% rate during the Bush years. The amount of money Americans took out of their bubbling home equity was more than double the increase in GDP under Bush. Meanwhile, U.S. industries continued to weaken and falter. Even the semiconductor and computer industries – once the crown jewels of the American industrial economy – basically collapsed under Bush, fleeing offshore. …

And, in late 2006, the sub-prime mortgage crisis began to unravel the very fabric of the world financial system, leading to the crashes of April and September 2008.

Just for a final nail in the coffin (and because I spent so long making a pretty graph from data sources here here and here), if lower top tax rates were good for GDP we’d expect to see countries with lower tax rates having higher growth, right?  Comparing the % top tax rate with % GDP growth for OCED (2010 data) there is no such trend (if anything R2 regression has the opposite slope): 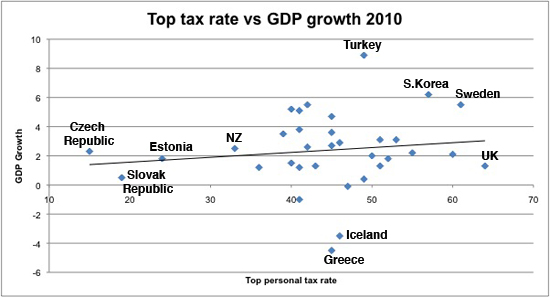 In short, the top personal tax rate in New Zealand is already very low in OECD terms.  If we want to improve the health of our country we shouldn’t lower it again, we should raise it, then spend the income retiring debt and investing in productive infrastructure and education.  Farrar and others of the Right push for ever lower taxes, but their arguments are laughably flimsy.  In search of their  “superior moral justification for selfishness” they’re going to have to do a lot better than that…

122 comments on “In search of a justification ”