“What’s unusual is the hemispheric scale of the heatwave,” said Michael Mann, director of the Earth System Science Center at Pennsylvania State University. “It’s not just the magnitude in any one location but that high temperatures are being seen over such a large area.”

Is it time to stop allowing governments to talk about what half measures they might put in place by 2050 or whenever yet? Someone (McFlock?) made a comment under a post through the week, to the effect that, if ever he was ever in a position comparable to supporting Nazism by drawing up death camp train timetables, then having fallen so far, he’d welcome  someone shooting him.

Thing is, I think there are already far too many of us complicit to at least that degree when it comes to enabling and supporting the ideologies and practices that result in global warming; warming that the scientific community  categorised as “extremely dangerous” almost ten years ago. 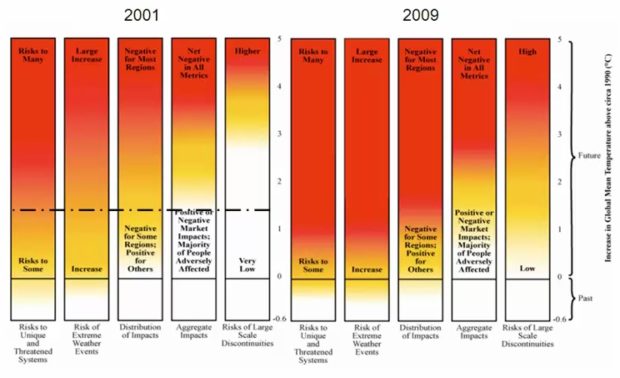 The hatched line in the graph is the 2 degrees above pre-industrial temperature “guardrail” that was considered acceptable (by politicains and economists) in 2001. As shown, by 2009 and in light of better scientific understanding and more precise data, the red, indicative of “not good”, invades well below that supposed safe level of warming in the majority of categories represented.

Way I see it, supporting Nazism and all it would have resulted in, is small cheese when placed next to supporting current political and economic ideologies – what with the global warming they’re bringing about.

Or maybe, like some imaginary compiler of timetables back in ’42, you can successfully view your actions, habits and activities as a very small and insignificant cog in a conveniently unimaginable machine?

Or maybe (to keep on the fascist theme) you are like Arthur Koestler, who recounted something along the lines of, that although he knew the Spanish fascists were coming to get him and that he really had to take off through the night cold of the mountains immediately, he nevertheless couldn’t quite pull himself away from the comfort of the glass of brandy in is hand and roaring fire before him?

I confess to being bamboozled by an apparent mind set that would hold fast to political and economic orders that are wreaking unprecedented damage across the entirety of all the environments we need in order to live – especially when it’s often down to some nonsense about one day utilising them to afford a life that’s nothing like the one benig led today.

Because whatever the image of the “perfect” life many better off people strive to attain, it’s safe to say that what’s involved in the striving is what’s going to make that life utterly impossible. And if by the skin of your teeth, not impossible for you and your generation, then certainly for the generations coming up behind.

I don’t have a handy, pre-packaged solution to any of this beyond simply suggesting that we stop dead in our tracks so that things don’t get any worse; so that we create space where we can spend our time and energies working on solutions. As it is, it’s like we’re looking for a cure to alcohol poisoning while standing at the bar getting pissed. And we know well enough how that ends.