What I think Pita Sharples fails to understand is that John Key and National don’t see international agreements the way the Left does.

The Maori Party is dead keen on the Declaration on the Rights of Indigenous Peoples because they believe that by signing on the New Zealand government will be committing itself, legally and morally, to the principles contained within, including the implication that indigenous peoples have special rights, and that will have real-world effects for policy etc.

Labour believes the same thing that’s why (wrongly, on balance, I think) it refused to sign on.

Key and National see a UN declaration and see that a) it’s international law so not really binding anyway if we don’t want it to be and b) it’s only a declaration, so not even ‘binding’ international law like the Law of the Sea or the Geneva Conventions (and we know how often those are breached). Key has said that the Declaration will change nothing.

So, this was an easy choice for Key. He has given what he sees as nothing and Sharples has got what he believes is something valuable. (giving Sharples the secret trip to New York to unveil it was a masterstroke). 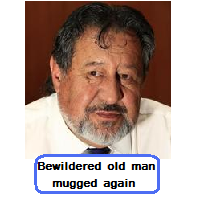 The problem for Sharples is that Key is Prime Minister. And if he thinks the Declaration is a meaningless piece of paper, that will be its effect in New Zealand.

This, along with giving Tariana Turia her Whanau Ora pipe dream but with no budget attached, is part of National’s clever manipulation of the Maori Party. They give away virtually nothing, in return the Maori Party leadership is co-opted and rolls over on the real issue – the foreshore and seabed.

I have to admit, this is masterful politics by National. They’re going to have the Maori Party singing the praises of a foreshore and seabed deal that fails to deliver what they want.