A few days ago New Zealand musician Lorde decided to heed the concerns of those justly complaining about the treatment of Palestine and cancel a planned concert in Israel.  With many others I applauded her decision.  I believe the treatment of the people of Palestine is one of the festering sores on our planet and until and unless nations can sort this out then there is little chance of peace in the Middle East occurring.

It seems that the state of Israel did not see things in the same way.  Maybe it is a New Zealand thing.  Just over a year ago New Zealand was accused of committing an act of war by Israeli Prime Minister Benjamin Netanyahu when it fronted a Security Council resolution to condemn the continued building of Israeli settlements on Palestinian land.  This was I believe Murray McCully’s finest hour.

Then Lorde received a similar attack for making a similarly principled decision.

It looks like the gloves are off and Israel is preparing to attack any suggestion that it is oppressing the Palestinian people, even though it is.

First there was talk of a fund being set up for counter propaganda purposes.  From the Times of Israel:

[Prime Minister Benjamin] Netanyahu and [Finance Minister Moshe] Kahlon wouldn’t have to worry about coalition squabbling if they were the actual princes of Israel, but they’ll never be royals, as popster Lorde would have sung in Tel Aviv had she not canceled her show. Yedioth reports on a new plan to make sure the next Lorde cancellation doesn’t happen, with Strategic Affairs Minister Gilad Erdan setting up an NGO and pouring at least NIS 128 million into fighting the Boycott Sanctions Divestment movement.

The paper notes that the body will be structured like Birthright — with rich foreign Jews matching the government amount and then some — to buy services from better PR companies and create a “civilian infrastructure that will help and be used by the State of Israel and the pro-Israel community to fight the delegitimization of Israel.”

And then what may be the first sign of action appeared by way of a full page advertisement taken out in the Washington Post.  Here it is: 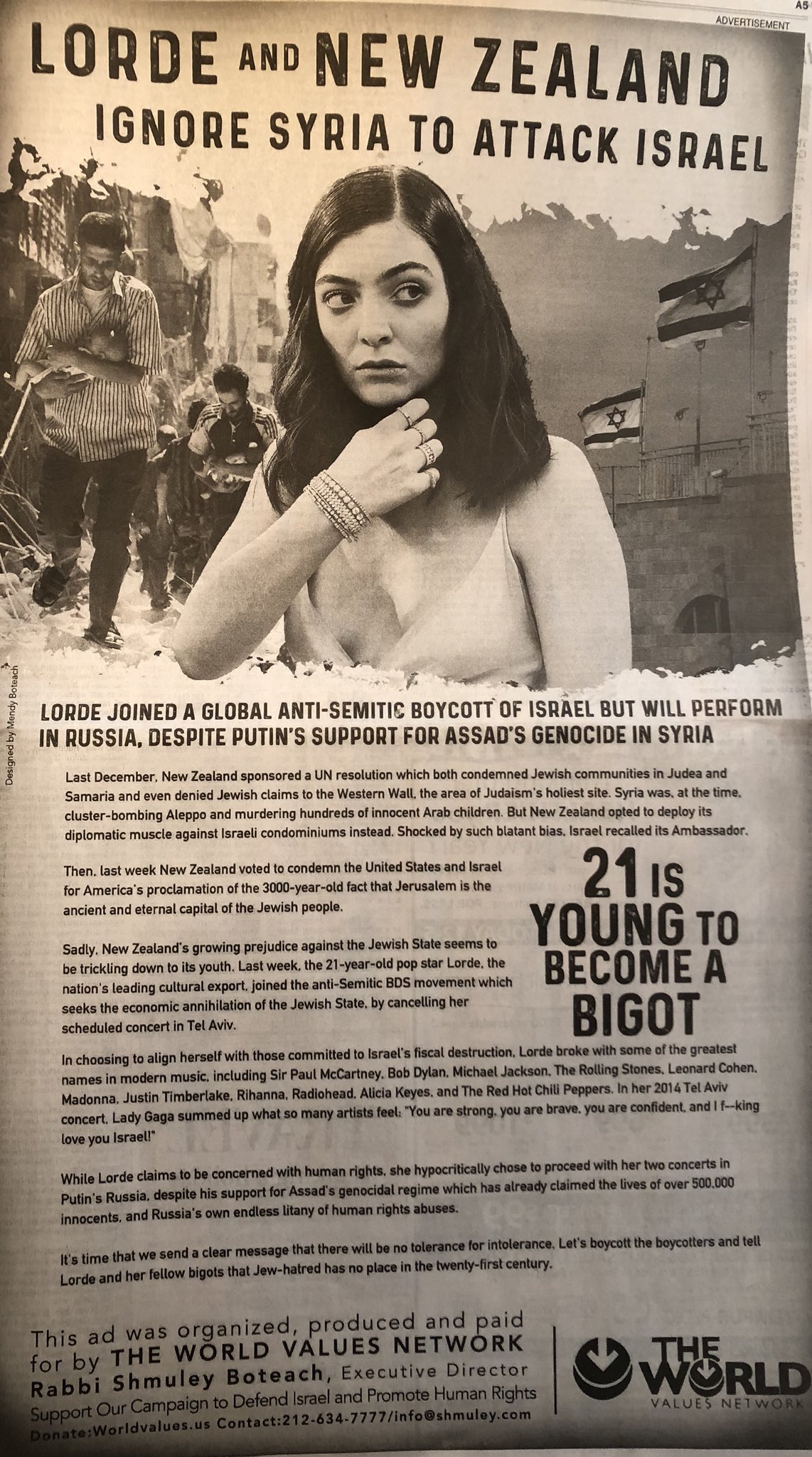 The person who placed the Ad, Rabbi Shmulay Boteach is described as one of the 50 most influential Jews in the world.  It seems that he is not in receipt of Israeli largesse, at least not yet, and has set up a GoFundMe page to fund the advertisement.

And don’t you love it when oppressors criticise people making a stand for human rights just because other oppressors also oppress.

To show the extreme steps the Israeli Government will go to in an attempt to curry international favour it has been reported that it is preparing to create a payola fund to get poor and developing nations to support Israel on the promise of cold hard cash.  From Jerusalem On Line:

After last week’s overwhelming majority against Israel at the UN General Assembly, Israeli Prime Minister Benjamin Netanyahu is planning to launch a project called 50/50, in which 50 countries that promise to support Israel will get $50 million each.

Israeli Prime Minister Benjamin Netanyahu plans to grant $50 million to countries who promise to support Israel in the international arena.

According to Israel News Company, Netanyahu’s idea is to set up a fund for a project called 50/50, in which 50 countries – mostly developing countries in Africa, Eastern Europe and Asia – will get $50 million each from Israel in exchange for diplomatic support.

The Foreign Ministry has already begun working on the project. Netanyahu is reportedly expected to push it forward in the next budget discussions.

The idea for the project was reportedly born after last week’s UN General Assembly vote on Jerusalem, in which 128 countries, including ones that have good diplomatic relations with Israel, voted against it.

Netanyahu is right in that the state of Israel is getting a lot of bad press lately.  But rather than attempting to bully or buy its way out of this problem which is of its own creation the best thing it could do is to attempt to reach peace with the state of Palestine.  And stop stealing Palestinian land.  And stop subjugating Palestinian people to the sort of treatment last seen during the Apartheid regime in South Africa.

168 comments on “Israel fights back ”