It could never happen here

Fresh from a stinging rebuke from the public over mining, Gerry must have hoped he was on to a winner this time:

Energy Minister Gerry Brownlee today announced that one of the world’s largest oil companies, Petrobras, has been awarded exploration rights for oil and gas in the previously unexplored Raukumara Basin on the east coast of the North Island.

Snaring Petrobras is arguably Brownlee’s biggest coup since emphatically putting the “welcome” mat out for oil and gas explorers over the last 18 months, and wooing oil majors at a global petroleum conference in Mexico earlier in the year. The five year permit, covering 12,333sq km, is the first in the Raukumara Basin area.

Problem is of course, that the timing of this announcement could hardly have been worse for the government. The whole world is watching as every minute of every day more and more of the Gulf of Mexico and costal regions of Louisiana die in a hellish brew of suffocating oil and toxic dispersants.

The Nats want to rely on our Kiwi “she’ll be right” attitude. That feeling we all have that when it comes to disasters, it could never happen here. Don’t worry, The Government will take care of us:

Govt will do all to prevent oil spill here

The government will do “all it can” to ensure there is adequate environmental protection before future deep-sea drilling in New Zealand following the oil spill in the Gulf of Mexico, Energy and Resources Minister Gerry Brownlee says.

Yeah right. Where the combined might of BP and the American government have comprehensively failed to protect America, the Nats are going to keep our country safe? This from the crew that can’t organise a cycleway to save themselves? What will they do – send Gerry with a mop and bucket? 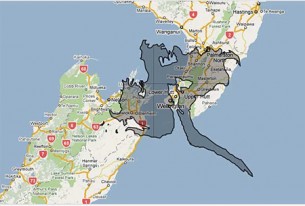 Because the sad fact is that it can happen here. New Zealand is not magically immune from disaster. And we have far too much at risk to trust it to the bland empty assurances of the likes of Brownlee. How much risk? I know it’s hard to get a sense of the Gulf spill in an NZ context, but this Stuff graphic of the current spill superimposed on NZ is extremely helpful. That’s how much of our waters and our beaches would have been poisoned – so far (and the gulf leak will be flowing for many weeks yet).

This remarkable clip (hat tip yeshe) showing reporting of a similar spill in 1979 shows how little the oil industry has learned about managing leaks in the last 30 years. Nothing. It isn’t good enough. We can’t risk that here. I would rather stop drilling for oil and transition to alternatives as soon as possible, but if we must drill the only sensible way forward is the one outlined by the Greens:

The Greens and Greenpeace want all deep water drilling put on hold until the cause of the Deepwater Horizon explosion is identified and the industry can demonstrate an ability to control the sort of leak that is being described as the worst environmental disaster to hit the United States.

Simple really. Before we do any more drilling around New Zealand, we need to be demonstrably sure that we can stop any leak. Why would we settle for anything less? Because it could happen here. And because that would be a disaster for all of us.

39 comments on “It could never happen here ”