Brownlee lying to the UN over Operation Burnham

The UN called for an investigation into Operation Burnham. Very inconvenient for the Nats who would rather sweep any dead civilians under the carpet and forget them. So naturally Gerry Brownlee responds with a lie.

Once upon a time

Once upon a time this country stood up to American and said no to nuclear weapons. Now we dare not say yes to saving the planet.

Brownlee as Foreign Minister as successful as you’d expect

Brownlee’s run as Foreign Minister is already a mess. Such is the depth of National’s talent pool.

Christchurch rebuilt must suffer the same central traffic madness as Auckland. Thus decrees Gerry Brownlee, as short-sighted, bullying, and ignorant as ever.

Gerry Brownlee is a walking disaster. Such is the depth of National’s talent pool that he is ranked number 4 in their lineup.

Defence Minister Gerry Brownlee says our training mission to Iraq is undergoing a transformation. We were warned when the troops first went that the mission was always intended to be looser than Brownlee publicly claimed at the time. And so it has turned out to be.

Brownlee is dragging Canterbury down

The Christchurch rebuild gets its second fail grade from Treasury. And what of the rebuild work that has been done with failed reinforcing steel?

Christchurch, keyisms and this state we’re in.

There was a gathering in Cathedral Square in Christchurch on Sunday the 21st of February.

A one and a half hour recording of the event was put on youtube. Speaking begins at around 13min.

Physical attacks on politicians is going too far. So too is faking a hate-speech outbreak.

Fight to save Christchurch’s trees

Christchurch has already lost so much. Now its “notable trees” are threatened. A small group is fighting to save them. Please help spread the word, or make a donation.

Nats failing Christchurch and lashing out at Treasury

NZ is again being asked to go to war in Iraq. The Clark Labour Government said no a decade ago, but in 2015 there may be a compelling reason to join the fight; this time it’s the right thing to do. New Standard author te reo putake puts the case for NZ entering the battle against ISIS.

What could possibly have Gerry behaving so erratically?

Power has been concentrated into the figure of one man – a man who has in recent weeks shown that he thinks he is above the rule of law. You might think your one vote doesn’t make much of a difference – but it is everything to us here. Another three years of National and Brownlee, and we might not have a vote at a local level at all.

The reality is we’re pretty relaxed about fixing Christchurch

For so many of the people in this still-broken city, they feel that this is a journey which they have been left to walk alone. Too often they find themselves fighting against the state, rather than working with them. One gets the impression that for all the visits and photo ops, Key just doesn’t get the situation down here.

Brownlee’s press release on urgency is pure smarm. The Nats have always abused urgency, and this current session is no exception.

The last piece of the Hobbit story

Emails released on the Standard today show that, during the Hobbit “dispute” the Government and others lied to the people of New Zealand to maintain a perception of a crisis.

It was a shameful moment in New Zealand’s political history.

On the Pike Report

But why has it taken the deaths of 29 men to get attention to health and safety regulations in mining?

NRT with yet another example of the Nats’ intimidation tactics.

People are waking up to National’s plan to remove the democratically-elected Christchurch City Council and replace it with its own hand-picked commissioners, who will then give a green light to Brownlee’s developer mates and the sale of council assets. You can already see the vultures circling – waiting for the chance to seize more public wealth for themselves.

Key is avoiding the hard questions, but his photo-op face is everywhere. The rest of the Nats are working hard at being invisible. Let’s bring a little sunlight into that darkness!

A challenge to Gerry Brownlee

Lianne Dalziel has left her political future to the people of Christchurch that she represents.

If it’s good enough for her to seek such a mandate, then why shouldn’t King Gerry do the same? 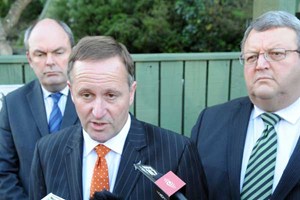 There’s a large number of reports coming out of Christchurch of businesses that have been demolished without Civil Defence consulting with the owners, as is procedure, and giving them a chance to recover vital equipment and records first. Disturbingly, some of these demolitions seem to have been carried out by ‘cowboys’ without CD approval.

When a millionaire director and a foreign corporate wanted millions in tax breaks, Key jumped to it. When SCF collapsed the investors got an average of $60K, no questions asked. But when it comes to helping the ordinary families of Christchurch and the West Coast, the Nats are nowhere to be seen once the cameras are gone.

Brownlee in gun for misleading the House

Mallard has laid a Privileges complaint over Brownlee’s Hobbit lies. Good. Brownlee and Key deserved to be hammered for their part in the Warners/Jackson shake-down that cost just $34m and work rights. Lockwood won’t uphold the complaint though. He hates Brownlee. Not enough to severely embarrass his party in election year though.

The idea of this little group-effort series of posts is to look at the major areas of government activity and have an objective look at how National is doing – both against their own promises and things that we hold important. Let’s start with the economy, the direct responsibility of Finance Minister Bill English and Economic Development Minister Gerry Brownlee.

Nats & Jackson played us for fools

The Herald has used the OIA to get hold of emails Peter Jackson sent Gerry Brownlee during the Hobbit shakedown. They show that the Actors’ Equity blacklisting was not a threat to the film staying here – yet Jackson and Brownlee told us it was to justify handing Warners $34 million and rushing through an anti-worker law.

What to do if you’re a government with an ideological fixation on selling assets, which is hugely unpopular? The public will catch on if you put SOEs as full entities up for auction. So, you don’t sell off the companies. Instead, you sell off the things they own or, through bond issues, their profit streams. We’ve been warning this would happen. Now, it is.

Brownlee ignored warnings that his reforms would increase power prices, not lower them as intended. Wholesale power prices have spiked from $50 to $300 per MWH. Exporters have cut production. Residential users are next. With power up and petrol breaking $2 a litre, energy is a handbrake on this supposed economic recovery.