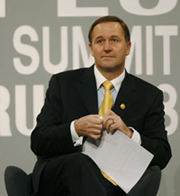 I was going to do a fisking of Key’s ‘major speech‘ today. But there’s nothing to fisk, no substance, no ideas, no vision. There’s just endless recycling of the same old Crosby-Textor lines and waffle. In fact, there’s one section that is just a bunch of rehashed lines – one after the other.

You get half way in and you’re thinking ‘hmm, still no substance, it must be coming’. Then you read “Our challenge as a country is therefore to preserve the strengths of the New Zealand economy, while addressing its weaknesses” and you think ‘ah ha, now he’s going to detail how he thinks we should meet those challenges’ and… nothing… just more waffle.

It’s like one of those essays you wrote in high school or uni when you hadn’t studied. You just chuck in every key-word you can think of and bulk it out by restating the question in longer form.

Key basically concedes defeat at one point: “I cannot emphasise enough that there are no quick-fix solutions here”. Mr Key, we’re not asking for quick-fixes, but we are asking for solutions, and you’re presenting none.

If the question that Key was meant to answer with this speech was ‘what are the Key Government’s ideas and plans for lifting New Zealand’s economic performance’? Then you would have to walk away from this speech concluding that he hasn’t a clue.

It would be laughable if it weren’t so serious.

1200 Kiwis a week are going on to the dole. About as many again are also losing their jobs. And we’ve got a Prime Minister and a government totally bereft of ideas and vision. I just hope for everyone’s sake this wasn’t the “new ideas to combat the rising tide of job losses” he was promising a couple of weeks ago after the collapse of Line7.

You know, come to think of it, I almost wish he had proposed a giant rollercoaster. At least that would have been a starting point for debate, from which workable ideas might have flowed. Where do we go now, when the PM’s response to crisis is to grin blankly and shrug his shoulders?