The median weekly income in New Zealand fell in the year to June from $538 to $529. That’s a fall even before inflation (and you have to take inflation into account or the figures are meaningless). After inflation, this is the third successive year in which the median income of New Zealanders has fallen. It’s now nearly 5% lower than when National came to power and 5.5% down from its all-time peak in 2007. This year alone, the median income fell 3.5%. 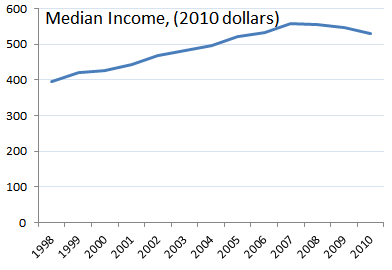 It’s important to note that average and median incomes are heading in opposite directions (before inflation). The average rose 1% to $687, which is still down nearly 1% after inflation. The median tells us what is happening to the ‘typical’ Kiwi whereas the average is affected by what happens to the elite. The fact that nominally the average is rising while the median is falling says that typical Kiwis’ incomes are falling even before inflation and the very wealthy are getting such big income increases that they can offset that to lift the average.

Looking just at wages. The median wage earners’ pay packet failed to keep up with inflation – rising just 1.2% (the slowest since 1999) vs inflation of 1.8%. Even those lucky enough not to have lost their jobs are seeing their pay eroded in real terms.

It’s clear that the Key Government has no plan to stop the fall in incomes that started during the global recession and is actually getting worse over a year after the recession supposedly ended. The truth, we know, is that Key told business he “would love to see wages drop” and that’s the goal we’re seeing realised. Ordinary Kiwis are getting poorer, while the rich get richer.

And it’s no good crying ‘but we got tax cuts!’ because, as we know, for most people the income tax cuts barely cover the GST hike and those that do get more are being funded by government debt, which we all have to pay for in the end.