It’s a shameful fact that the political right use refugees as a weapon to drum up populist conservative backlash. John Key was at it (again) earlier this month:

A people-smuggling boat with 65 people on board was a “credible risk and threat”, and had the capability to make it to New Zealand, the Prime Minister says.

What the hell kind of “risk” and “threat” is a boat load of scared and desperate women and kids to this country? Are we really so frightened of helping people? To their credit, Labour and The Greens spoke up:

Labour leader Andrew Little said the chances of refugees making it to New Zealand in boats were zero. He said Mr Key was simply trying to distract the public. “This looks like National Party standard distraction material, to raise some sort of bogey that he thinks is going to be there and will get people excited,” Mr Little said. “And divert attention from things like falling dairy prices, a lower national income – the sort of issues that are exercising a lot of people at the moment.”

Green Party immigration spokesperson Denise Roche agreed that the Government was inventing a bogeyman. “I do worry that there’s a beat-up that consistently comes from this Government about potential refugees and asylum seekers who use boats to get here.

Since then we’ve had the claims that Australia has paid off refugee boat crew (“people smugglers”) to divert elsewhere, claims that this “state bribery” has been going on for years, and Tony Abbot effectively admitting as much. Digging deep into his puddle of moral rectitude, Key refused to express an opinion on this tactic, because he could see “both sides of the argument”.

Despite the fact that NZ hasn’t increased its refugee quota since 1987 (where were you Labour?), Key was sure yesterday morning that we shouldn’t raise our quota. Then it emerged that he knows so little about the actual refugee situation in NZ that he didn’t even know what the quota was:

Prime Minister John Key has admitted to getting his numbers wrong and greatly overestimating the number of refugees New Zealand settles. … “Yes, it is 750, but we have family reunification, so the numbers swell to thousands. I think it is 3000 or 4000 off the top of my head,” Mr Key said. After being challenged on that figure by the Greens and other advocacy groups, he said the figure was wrong.
…
Today [Green MP] Ms Roche released figures from Immigration New Zealand which showed that in the 2013/14 financial year a total of 1153 refugees, asylum-seekers and family members were accepted. That figure included 750 refugees accepted as part of the quota, 334 under family reunification, and 69 asylum seekers.

That wasn’t the only thing Key got wrong. For example:

Here are the Facts, Prime Minister
Press Release: WagePeaceNZ
…
3. When referring to refugees, our Prime Minister stated that, “Our humanitarian position is, I think, top of the class.”

Fact: When it comes to refugee in-take, New Zealand is far closer to the bottom of the class. New UNHCR figures show we are 90th in the world in the total number of refugees we host per capita. Worse, if you figure by our relative wealth, then we rank 116th. Our world standing has actually dropped by three places since last year. These figures were released last week.

Amnesty International has also criticised our “top of the class” position on refugees:

John Key’s refugee comments disappointing
…
New Zealand has not increased its refugee quota for 30 years. Amnesty International is calling on the Government to double the quota from the current 750. New Zealand ranks 87th in the world in per capita rankings for its total refugee resettlement. By comparison Australia takes three times as many refugees on a per capita basis.

“As New Zealand prepares for its presidency of the UN Security Council in July it must set an example and not leave neighbouring countries like Turkey to do it all. Other countries have stepped up: Germany is taking 30,000 Syrian refugees, Canada is taking 10,000,” said Grant Bayldon.

“New Zealand’s tiny refugee intake calls into question its Security Council election campaign which positioned that nation as being a good global citizen, punching above its weight on the world stage.”

It is long past time that NZ raised its refugee quota. A private member’s bill by Green Party MP Denise Roche proposes increasing the quota to 1000. It has wide support:

Labour, New Zealand First, Act, United Future and the Maori Party all want to see the refugee numbers increase by varying degrees. NZ First’s support would come only if immigration levels were cut at the same time.

Come on Nats, do the right thing, raise the quota. 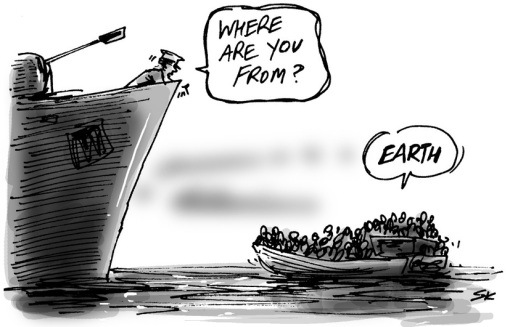 69 comments on “Lift the refugee quota ”