National is having a pretty horrid time of it just now. Key’s failure to lead on Nick Smith, industrial disputes everywhere, making a mess of MFAT, falling popularity, and so on.

But if there is one silver lining for the Nats, it is that the high-profile headlines take the focus of the boring old economy: 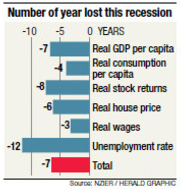 The economy is back where it was in 2005, with nothing to show for the past seven years. That is the conclusion from the Institute of Economic Research which has replicated the Economist’s Proust index for New Zealand.

Real gross domestic product per capita, for example, is back where it was in 2005. It got higher than that before the recession, but lower than that subsequently.

Private consumption, again in real per capita terms, is only just back to where it was four years ago. Real returns on equities have nothing to show for the past eight years, while real house prices are back where they were six years ago.

Real wages have slipped back to where they were three years ago. And the unemployment rate over the past couple of years has wobbled around a level previously not seen since the year 2000.

Lot’s of countries are going backwards, but in 2008 National promised us they had a plan. Every budget has predicted growth and new jobs. Instead we get excuses:

Finance Minister Bill English is defending a slowdown in the economy, saying New Zealand is better off than many other countries despite a poor gross domestic product (GDP) result.

Manufacturing fell 2.5 percent, mainly due to a decline in primary food manufacturing.
Mr English says the December quarter was challenging as households saved more and spent less, as well as tough economic conditions around the world. …

“Agriculture is again providing the bulk of the impetus for growth in the New Zealand economy while manufacturing continues to decline and with it the opportunity to export high value-added products,” Greens co-leader Russel Norman says. “One of the key measures of a more resilient and competitive economy is the number of firms exporting. Under the National government, the number of companies exporting has stagnated.” Both Labour and the Greens say the government’s focus on partial asset sales is distracting it from fixing structural problems in the economy.

Brighter future my arse. Here’s an honest slogan for National to run under next election.
“National – because we’re not as bad as some countries”. Please make your own suggestions in comments…

15 comments on “Meanwhile the economy… ”