“Life, Liberty and the Pursuit of happiness”. (UBI Series)

I believe, as our first Labour Government did, that everyone has the right “to a life” regardless of their perceived ,”value”.

In our country, with its excess of resources and capability, we have no excuse for poverty.

For leaving people behind.

Expecting a bit much aren’t you? We haven’t had that since Muldoon. At least he had them. The kind of people now asking for a plan were those who complained about governments that “interfered with the sacred ‘free market’” and screamed about “central planning”, “picking winners”, “protectionism” etc. They prefer just getting cheap labour to give the illusion of economic growth. And build a cycleway!

Nick Kelly on UK austerity and who should have paid for the financial crisis.

Too many jobs being created

The latest unemployment data showing the jobless rate falling to under 4% follows the equally bad 1.0% economic growth in the September quarter and a budget surplus of $5.5b, confirming the economy is going down like Donald Trump, as predicted by the ANZ Bank’s business confidence survey

There is something very wrong with “our” media when it takes a stand-up comedian to alert people to important stuff. But anyway…

Rod Oram at Newsroom: “More of the same won’t deliver for New Zealand. Hopefully, new leaders and policies will.”

Expect plenty of Nat boasting on “the economy” in the election campaign. They’ll be desperate to hide the inconvenient fact that ordinary workers are going backwards. 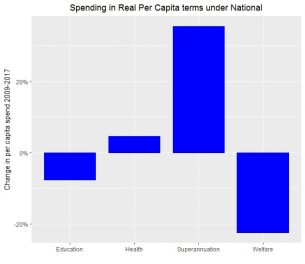 We need new thinking on the economy – zero emissions, sustainable, a big redistribution from rich to poor. But the list of current economic woe shows that even on their own old conventional terms the Nats are useless economic managers.

English’s scaremongering about Labour’s immigration policy does nothing but highlight the fundamental weakness of our economy. Just how anemic are we after 9 long years?

Though artificially boosted by high immigration and disaster rebuilds, the NZ economy is in the doldrums, and National are a failure even by their own goals and targets. I predict that National will soon abolish all targets, and that this will be “a sign of our success”.

Monbiot on the embedded economy

A model for a sustainable economy. Something to ponder on a wet holiday weekend.

Trump and the NZ housing bubble

The bright orange trigger for a sharp rise in mortgage interest rates may have just arrived. Our over-indebted home owners are highly vulnerable.

Hollowing out the regions

The closure of 19 mostly rural Westpac branches is indicative of the ongoing hollowing out the regions. Neglecting Northland cost the Nats the last by election. Neglecting regional NZ as a whole might cost them the next general.

Until we sort out our housing and unemployment problems it is surely time to reign in NZ’s currently record levels of immigration.

The Reserve Bank just cut the OCR to a historic low of 2%. And no it’s not good (economic) news.

In a sign of just how stressed our economy is: “Inland Revenue is chasing employers for unpaid KiwiSaver contributions worth tens of millions of dollars.”

Rod Oram’s Sunday Star-Times, reprinted on Facebook here, adds yet another voice to the chorous of economic warnings: “Our Road Runner economy is zooming towards the cliff-edge”…

It’s basically flat-lining – only partially animated by immigration and a housing bubble.

National the party of economic lunacy

A “$17 billion hole in the economy”. An estimated $18 billion lost because National stopped investing in the super fund. A record national debt. And we’re still talking about tax cuts? Lunacy!

Two pieces this week on how National’s mismanagement of the economy has left us in the doldrums.

The ANZ survey shows business confidence at the lowest levels since the financial crisis. Yesterday John Key insisted that it was “reasonably positive”. He was either completely wrong or lying through his teeth. Either way it’s unacceptable.

Labour is the party of economic competence

The old myth that National are good managers of the economy should now be well dead and buried. For a recent case study see Robertson vs Joyce on dairy prices…

Oram on the regions

Rod Oram looks at the way the regions are stifled in his Sunday Star Times piece.

The government has awarded itself a nice report card. Let’s take a closer look.

There never was a rockstar

We’ve just seen the weakest quarterly growth in two years, and economists are warning of possible recession. The NZ economy needs to be fundamentally reshaped.

As the economy stalls it’s a great time to be a bank!

Ho ho – what am I saying? It’s always a great time to be a bank.