John Key famously said “we would love to see wages drop“. It sure didn’t take him long in government to see his ambition achieved.

Here are the wage hourly wages rates, adjusted for inflation, over the last decade and Treasury’s projections from today’s budget. 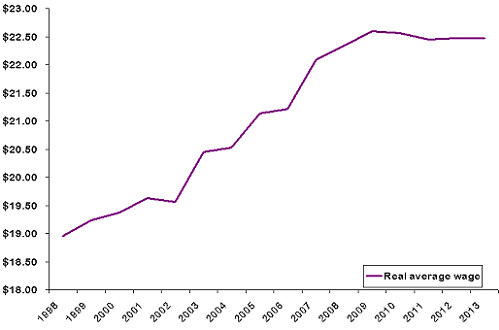 After peaking this year (wages lag unemployment), wages will drop then stall.

John Key didn’t create the conditions that are causing this. It’s the unemployment from the global recession.

He does have a responsibility to do something about it though. He should have had something in his budget that was going to tackle unemployment, set to get near 8% (or 10% in the downside projections) and falling wages. More than that, he has promised, and Bill English repeated the promise today, to close the wage gap with Australia. That can’t happen while our wages are falling.