Most allegations against Julian Assange dropped

I’ve always considered the handling of Julian Assange’s case by the Swedish and UK authorities as being politically motivated in the extreme. LPrent voiced the very same suspicion about the Swedish prosecutor Marianne Ny way back in 2010 and that has been the way things have played out. The idea has been to make an example out of Assange and to demonstrate how miserable life can quickly become for you if you cross the elite establishment as a whistleblower. Now we learn that Swedish prosecutors have let most of the allegations against Assange drift past the statute of limitations where they must be dropped.

Swedish prosecutors on Thursday officially dropped their investigation into three cases surrounding WikiLeaks founder Julian Assange, according to a report from Agence France-Presse.

The charges being dropped involve one count of sexual assault and one count of unlawful coercion, according to reports. Swedish law stipulates that suspects must be questioned before the statute of limitations expires, otherwise they can no longer be charged for the crimes. Prosecutors had until Thursday to bring charges against Assange.

To be very clear, Assange and the Ecuadorans have left an open invitation to Swedish authorities to question him in the UK, for years now: 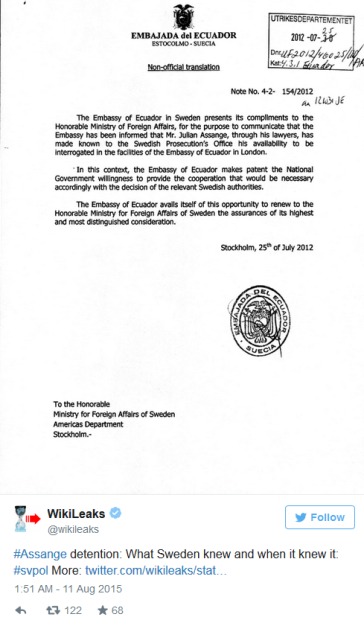 The fact that Swedish authorities never did, but instead allowed the allegations to legally expire, suggests to me that the prosecution had insufficient grounds or perhaps motivation, to proceed with from the very start.

This now means that there has been no justice for anyone: not for Assange who has been trapped in an office building for 5 years, nor for the female complainants in Sweden. The most serious charge of rape against Assange still stands because the statue of limitations on that allegation is 10 years. But there are few signs that Sweden is moving with any urgency to question Assange on that allegation either. The plan appears to be to simply let Assange rot away in a corner, one day at a time.

Meanwhile it has surfaced that Swedish authorities have questioned 44 other people in the UK during the course of other investigations, during the time of the Assange saga. Just not Assange himself. You cannot make this stuff up.

Meanwhile, UK human rights campaigner Peter Tatchell said that by agreeing to interview 44 people in the UK, but not Assange, Sweden was “guilty of double standards and victimization,” adding they are “making an exception of him.”

“It is wrong to deny Assange the option to be interviewed in the UK, which has been extended to others and which he has been offering for five years,” the Press Association cited him as saying.

“The Swedish authorities are not applying the law about overseas interviews consistently and fairly. They are acting in an exceptional and discriminatory way towards Assange. Julian Assange has been in various forms of detention for five years, without ever having been charged with any offence. This amounts to pre-trial punishment and is a gross abuse of his human rights and the legal system.”

As I said, Assange’s case has been managed in an utterly political and cynical manner by the authorities, from the very start.

94 comments on “Most allegations against Julian Assange dropped ”