Should we let the ‘Bumbling Jihadi’ Mark Taylor back into NZ? What message do we send the world if we don’t?

“I will apologise to the people of Parihaka who are here, while I do recount some of the important history that they have heard and know and live and breathed, but that still today, too many in our country are not aware of and are not familiar with and so I seek to put it on record in the House as part of my contribution.”

Dr Jarrod Gilbert has a provocative opinion piece on the Herald website today, proposing that speeding fines become income related. It’s an interesting argument, but not a new one. Gilbert cites sixteenth century French philosopher Montesquieu as one of the first to wonder if there can be equality under the law with monetary penalties that […]

One of our key political challenges now is to broaden the understanding of what matters.

An appropriate apology and an issue that needs fixing

The Ministry of Social Development illegally penalised a woman who refused to name the rapist father of her child. The case shines a spotlight on an issue that needs fixing.

Key on the Teina Pora compensation 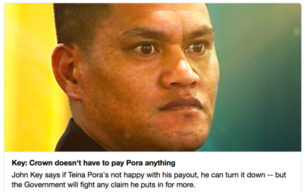 The plot to hack The Standard

As reported by Newshub: “Slater sought a court order to keep his name and the details of this case secret forever. However Newshub and others, including the owner of The Standard, fought him in court and won.”

The Police’s return yesterday of Nicky Hager’s data, equipment and belongings is – too little and too late – a measure of justice for Hager. But the process doesn’t end there, and open questions remain.

Most allegations against Julian Assange dropped

Most of the allegations against Assange have been dropped but Swedish authorities still refuse to question him in London. And Assange still hasn’t been charged with a single crime.

I Fought the Law

A quick look at the legalities of Ponytailgate as it affects the worker, the cafe, the NZ Herald and the PM. There could be court, tribunal and commission hearings that drag on for months, with potential big financial and political implications for the players.

Did commenters on the recent Julian Assange post overstep the mark in their defence of the Wikileaks founder? Are they really rape apologists?

A new review of compensation for David Bain. Another fine mess courtesy of Collins/Slater and National.

Roger Sutton needs the book thrown at him

I have no real opinion about the details of the complaint against Roger Sutton, there simply isn’t enough information in the context. That would require seeing the report. However I do have strong opinion about someone who breaks the confidentiality clauses of any agreement. Throw the book at them

I’ve been thinking about politics, assumptions, and justice. I sat in on a recording of The Egonomist on Friday – thanks for having me there, guys! – and we discussed some of the issues and reactions to Sarah Wilson‘s articles on WINZ, specifically the backlash from people who insist that Sarah must be a liar, […]

When the government dropped charges against former Pike River boss Peter Whittall over the Pike River mine explosion, they claimed that the simultaneous announcement that he would pay compensation to the families of the 29 men he was accused of killing was just a coincidence, and that there was no deal. As usual, they lied.

Judge Jane Farish has ordered Pike River to pay $110,000 compensation for each of the families who suffered the loss of a loved one.  But the various parties are not committing as yet to making sure that the compensation is paid.  Justice demands that every cent is paid.

So the Ministry of Health has relented to some caregivers and is paying them something… but not others. Margaret Spencer has given up her life to look after her adult son, but gets no compensation for it. If she gave her son over to strangers to look after, not only would the MoH have to […]

Finlayson says that paying compo to women abused by cops would “open the floodgates”. In other words, he reckons all the other claims that would come out of the woodwork would cost too much. What’s right is right. No matter the cost. ‘Floodgates’ is just an admission that the hundreds have been harmed. This government doesn’t have the guts to do right by them.

She admits that it probably won’t do what it sets out to do. She accepts that it might be unjust. She understands that it will be expensive. Nevertheless she supports it.

Chief Justice Dame Sian Elias has kicked off a debate on whether our justice policy is working [PDF  link]. Her view is that the frequent failure of punitive sanctions demands a rethink. Her analysis is supported by over 40 years experience in the criminal justice system and in the TV3 clip (below), her views seem […]

A healthy dose of reality on prisons

Peter Williams QC was on Breakfast this morning giving a refreshingly frank assessment of the problems with our prison and justice systems – specifically how *not* to solve them: Our prisons are a complete and absolute disgrace but they’re not going to be helped by privatisiation. Worth watching.