This NAct government is so anti-worker that they have managed to re-arrange the calendar so that we get 5 fewer holidays in this government’s term than the last Labour one.  And that’s before they sell off our 4th week.

That’s an average of 1.67 fewer per year – with 2 fewer this year and next, and 1 fewer in the first year.  The latest insult is organising for Anzac day to fall on Easter Monday – something that’s not happened before in history.  Our Anzac allies all get a fair suck of the sav and a 5 day Easter.  We get nowt.

It’s the second year in a row we’ll miss out on both Anzac Day and Waitangi Day – and we lost Anzac Day in 2009 as well.  The government has ruled out Mondayising (now there’s an awful word for a great concept) Waitangi Day, but only ranks special legislation for an extra Easter holiday as “extremely unlikely” – now there’s an opening!

The serious side of this is that the government will be allowing many employers to take the 4th week of holiday off workers.  Yes it will be “consensual” – although try asking any employee if they’ve really felt they had much option on their employment conditions when they signed on for a new job.  I know I “consented” to opt-out of the EU working-hours directive at every job I had in the UK as I wanted to actually be employed…

That fourth week is part of trying to reduce worker stress.  Without it, those workers may or may not get a little bit more money, but they certainly won’t get the opportunity to be as “relaxed” as the Minister for Overseas Holidays, John Key. 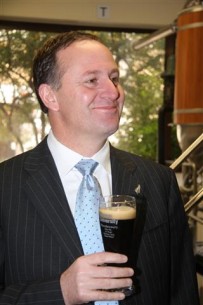 I'm taking extra weeks holiday, so I need you to cut back to 3