National: it’s not worth the pay cut

The National Party are clearly worried. They’ve done pretty well so far with the populist rallying cry of tax cuts, but they always knew their record on wages would come up at some point.

Because as National themselves are fully aware, while tax cuts might on the face of it put more money into workers’ pockets, their industrial relations policies are so heavily geared towards keeping wages down that for most working people the promised tax cuts simply aren’t worth the pay cut that would follow.

With the Council of Trade Unions this week announcing its intention to run a strong campaign based on protecting work rights and lifting wages, National clearly saw the game was up and entered into full inoculation mode.

Their first salvo was fired yesterday by the party’s resident blogger and former researcher David Farrar. By calculating the average wage over National’s last term and comparing it to Labour’s, then adjusting for tax rates and inflation, Farrar argued workers gained an extra $83.59 in take-home pay under National and just $33.90 under Labour. That worked out, he said, to a 15.2% increase under National and just 5.1% under Labour.

So the next time someone drones on about how bad the 1990s were for the average worker,Ã‚ Farrar gloated, just remember they were three times better than the last eight years.

Of course, Farrar’s statistics were self-serving crap. Anyone who knows the first thing about stats understands that it’s pointless to use the mean to discuss the wages of the typical worker, especially if you’re looking at the period of the last National government when inequality increased as rapidly as it did.

The median is a better measure by far: 50% of people earn more than it and 50% earn less, while most people earn somewhere thereabouts. As a pollster by trade, Farrar should know this. The man deals in statistics every day. He knows which ones are meaningful, which ones are misleading, and how to spin them either way to say whatever you like. That he chose to use the mean rather than the median shows just how disingenuous his little exercise really was.

Because when you use the median instead, the difference becomes clear immediately. Here’s a graph on median wage increases between 1991 and 2006. Note the difference in wage rises between the red and the blue: 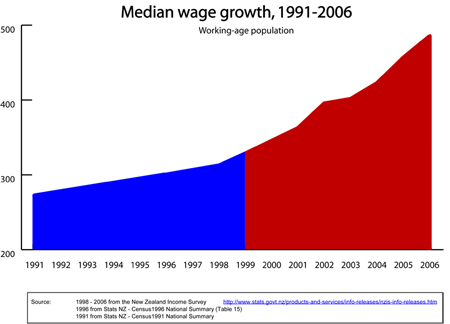 But of course, as Farrar points out, you have to adjust for inflation. On that we’re agreed. He also argues that we should adjust for tax rates so that we’re measuring take-home pay rather than wages.

The fundamental problem with this approach is that if I get a $20 a week tax cut but corresponding cuts to public services mean I’m paying an extra $40 a week in user charges, I’m not actually any better off even if my tax bill says so. But we’ll factor it in to keep David happy.

We’ll also exclude Working for Families, a major tax credit for working families that means many low-income workers effectively pay no tax at all. And to make things even harder for the red team, we’ll also exclude government tax credits for KiwiSaver which, as No Right Turn has pointed out, are more generous than National’s 2005 tax cut plan.

So even given all these concessions, how does the typical worker’s take-home pay compare between National and Labour? 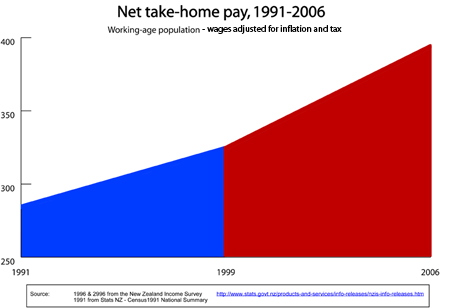 Yep, even under David’s handicap workers have had an increase of 21% ($69) in their take-home pay in the seven years of Labour government between 1999-2006, compared with just 14% ($41) under eight years of National from 1991-1999. And that’s without having to borrow, sell assets or increase user charges.

So David, next time you drone on about how bad Labour’s been for the average worker, just remember they’re three times better off than they were under National in the 90s.

Because when you add it all up, National’s tax cuts just aren’t worth the pay cut. And sooner or later, the voters are going to figure it out.

[UPDATE: Fixed the median wages graph to include the year 2000.]

58 comments on “National: it’s not worth the pay cut ”