The hit job that has just been performed on Winston Peters is a sign of how desperate National is to divert attention from Jacindamania.  But I suspect the attempt will backfire.

The timing and the mode of disclosure, using multiple media contacts to ensure the news was maximised suggests strongly that the spreading of the news was deliberate rather than accidental.  It appears that Newshub and Newsroom both knew about the story.  It has been reported this morning that Anne Tolley had been given a heads up by way of a no surprises disclosure two weeks ago.  And Newshub has disclosed that it received an anonymous phone call a couple of days after Tolley was told of Peters’ problems.

The Beehive was told about Winston Peters’ private meeting over his superannuation payments a fortnight ago and before it was leaked to media, the Herald can reveal.

The Ministry of Social Development told its minister Anne Tolley on August 15 under the “no surprises” policy that it had met NZ First leader Winston Peters about his superannuation payments. The Prime Minister’s office has confirmed English’s chief of staff Wayne Eagleson was then told by Tolley’s office. A spokesperson said Eagleson did not tell English or others in the office.

Tolley has denied the leak came from her office.

News of that briefing comes as Peters questions how news he had to repay money for superannuation overpayments made it to the media, saying it would be a “criminal” action for his personal information to be leaked.

Winston Peters is not amused.  He is quoted in Stuff as follows:

Someone decided they would break the law and leak it in a political way and some of those tweets and other comments point to knowledge out there that it was malicious and politically dirty,” Peters told media following a candidates meeting in Northland on Monday night.

I’ve been flat out, as you know, on the campaign of issues and when I’ve got time I’ll turn my mind to it, but I’m not going to stand by and let someone get away with blatant dirty politics and breaking the law.”

The matter could be easily progressed by release of some information and I believe that Peters should do this.  He should just disclose the form he completed when he applied for the benefit.  Presuming he completed a manual form he could release the form itself and the question of who is responsible will be answered.  Here is the relevant part of the current form: 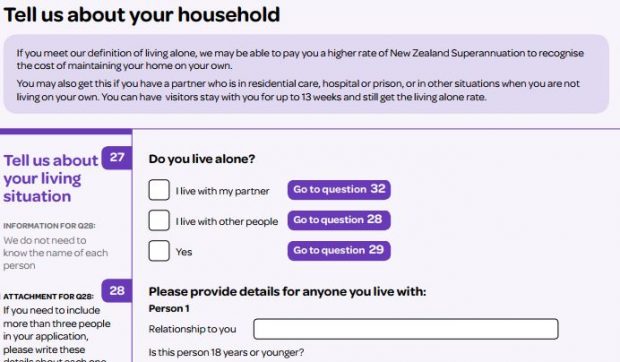 And you have to wonder what this will do to the possibility of a National New Zealand First coalition.  It is hard to imagine how this could now occur.  Perhaps as Matthew Hooton has said National’s strategy now is to drive New Zealand First and the Greens under 5 %, and for National to hold its vote and have an absolute majority.

If true this is a very risky strategy.  Most importantly it could shake loose New Zealand First voters and send them Labour’s way.  Rumours that National’s overnight polling has shown that Labour is now ahead of it may be right and may explain this very risky activity.