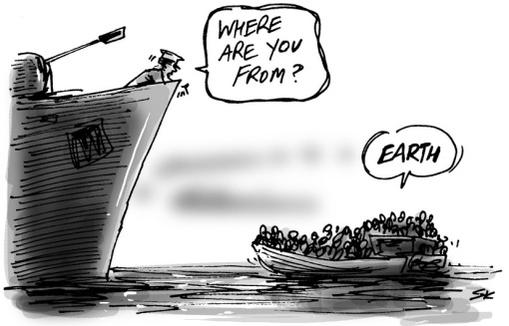 It is absolutely predictable.  When the Young Nats ask the Government to urgently review the current refugee quota level you know a change is going to happen.

This is not the first absolutely heart breaking flow of humanity requiring urgent action by nation states.  But this is the first one that is not only televised but facebooked and twittered and youtubed.  Photos of dead three year old kids being washed ashore on Turkey’s beaches have grabbed everyone’s attention and determined that all of us, from the most sympathetic humanitarian left winger to the most obnoxious selfish right winger, have to do something about it.

And here in sleepy Aotearoa the focus groups have spoken.  John Key is preparing for an inglorious backdown that Crosby Textor will try to present as inspired leadership.

Four days ago Key was not moving.  TV3 had this report:

New Zealand’s refugee quota will stay at 750 a year, despite Opposition calls for more to be accepted.

Prime Minister John Key made that clear today after Labour, the Greens and United Future appealed for an urgent increase.

“I think we should continue the process we are going through,” Mr Key told reporters.

“We will have a review in 2016. We will assess our capacity and capability and whether we think it’s right to keep it at 750 or change it, and we will make the call.”

Then two days ago the language suddenly softened. From the Herald:

The New Zealand Government was considering fast-tracking a review of how many refugees it takes, Mr Key said today, as the humanitarian crisis escalates with millions fleeing war-torn Syria.

A review of New Zealand’s refugee quota is scheduled for next year. But as pressure mounts on the Government to do its bit in helping the millions displaced across Europe, Mr Key told reporters in Christchurch today that “we’re not ruling out doing more”.

“We’re not ruling out looking at whether there is more that we could possibly do earlier and maybe specifically in relation to what we are seeing at the moment.”

What is funny is the almost identical response to the issue being displayed by the English Conservatives.  It is almost as if they are being advised by the same organisation and conducting the same focus groups and getting the same results.

Two days ago the Guardian described the Conservative’s position in this way:

David Cameron faced accusations of heartlessness after he insisted Britain should not take any further refugees from the war-torn Middle East, as community groups prepared to show that councils in the UK are willing to take thousands more.

The prime minister knows he and the home secretary, Theresa May, will be pressured over the migration issue when parliament returns next week, but some senior Tory backbenchers said they expected Cameron to shift his ground after distressing pictures of a drowned child, who had been found washed up on a beach in Turkey, went viral.

Cameron insisted the best solution to the crisis was to bring peace and stability to the Middle East. During a visit to Northamptonshire, he said: “We have taken a number of genuine asylum seekers from Syrian refugee camps and we keep that under review, but we think the most important thing is to try to bring peace and stability to that part of the world.

“I don’t think there is an answer that can be achieved simply by taking more and more refugees.”

Then suddenly as quickly as you can say “what do the focus groups say?” there was a backflip.  Yesterday the Guardian reported this:

David Cameron has bowed to growing international and domestic demands that Britain take in more refugees fleeing the Syrian civil war by indicating that the UK would accept thousands more refugees.

Final details of the numbers, funding and planned location of the refugees, were being urgently sorted out in Whitehall, with local councils insisting the programme had to be fully funded by central government.

Cameron is expected to map out his new approach to the crisis after long arranged talks in Madrid on Friday with the Spanish prime minister Mariano Rajoy, originally convened to discuss Britain’s plans for reform of the European Union.

He may not be able to put a specific number on how many refugees the government is willing to take, but it is expected the government will make a Commons statement on Monday when parliament returns after the summer recess.

Cameron’s language has moved on from earlier when he described groups of refugees as a swarm.

Josie Pagani has an interesting take on the issue.  While she agrees something should be done now she still thinks that military intervention in Syria should occur and thinks that the increased power of surveillance introduced last year by the Government is a good thing.  Her view has Blairite middle way written all over it.

With both Labour and the Greens announcing their intention to seek the introduction of bills to double the quota this year in Labour’s case and to permanently increase the quota to a minimum of 1,000 per annum in the Green’s case National will have to come up with something.  Soon.  After all if Parliament can urgently take action to ensure that people can get boozed at 5 in the morning while watching a rugby game it has to be able to take action to try and help desperate homeless people that are moving to Europe en masse.