This week the Herald presented some good news:

Average wages have surged in recent months but the latest unemployment stats show no relief after three months of nailbiting news about labour shortages.

Wages grew 2.6 per cent in the three months ending on September 30.

The September quarter stats have shed some light on whether any progress was been made addressing chronic staff shortages amid challenges from low immigration, inflation, and low population growth.

Many economists were expecting unemployment to fall back to record lows and wage growth to be near record highs.

Instead, the jobless rate stayed at 3.3 per cent.

The biggest leap ever recorded in average hourly earnings occurred over the year to September 30.

Average ordinary hourly earnings, as measured by the Quarterly Employment Survey (QES), increased to $37.86, an annual increase of $2.61 or 7.4 per cent.

“This is the largest annual rise in ordinary time hourly earnings since this series began in 1989,” international and business performance statistics senior manager Darren Allan said.

The LCI’s all salary and wage rates (including overtime) index rose by 3.7 per cent, the second highest annual increase since the series began in 1993.

And in further good news First Union has concluded wage negotiations which will see the living wage for Countdown workers, a 12% wage increase, and which will possibly be the first precursor of a fair pay agreement in Aotearoa.

Thousands of FIRST Union members at Countdown supermarkets have voted to accept a significant new 2-year Collective Agreement that includes wage increases of around 12%, a starting Living Wage, improvements to pandemic leave and sick leave, and commitments to work collaboratively on urgent security and staffing issues.

The new Collective Agreement, negotiated by a team of FIRST Union delegates and nationally voted on by members over the last month, puts Countdown workers on some of the highest wages in the supermarket industry and could lay the groundwork for a Fair Pay Agreement (FPA) in the sector to cover all workers across the country, said Ben Peterson, FIRST Union Acting Retail and Finance Secretary.

“Full credit goes to our tireless Countdown delegates, who have worked selflessly for their colleagues across Aotearoa to negotiate a deal that benefits everyone who works for the company as well as the communities they live in,” said Mr Peterson.

Mike Hosking responded in typical fashion claiming that the Government has a death rattle about it.  Significant wage increases and low unemployment in Mike’s weird reality are bad things.

I do not think that his unrelenting negativity is random.  It mirrors National’s approach. And if you needed any proof. 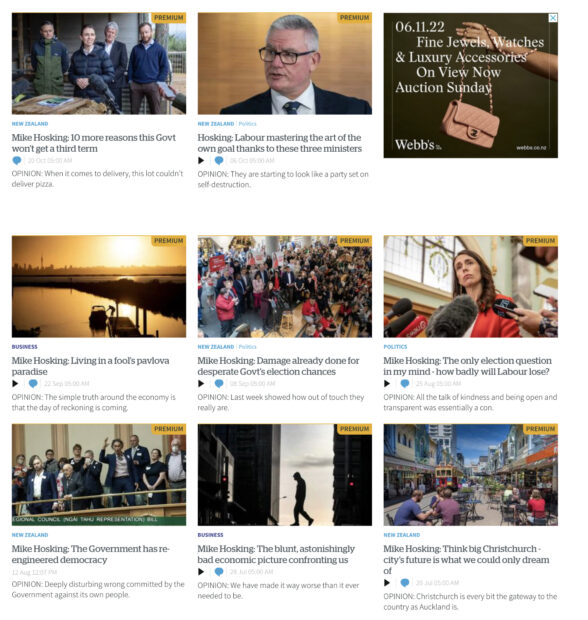 This reflects a general approach throughout the world.  The right campaign on fear, the left campaign on hope.

The arguments are deeply disingenuous.

Economic pressures are caused by overseas events.  As good as Jacinda Ardern is she is not responsible for the Ukraine.

Mortgage rate increases are a world wide phenomenon.    Just this week the Bank of England increased its rate to 3%.

The Housing Crisis could be 12 months away from being radically eased with record numbers of new state and privately owned houses being completed.

Three Waters is vital.  If anyone can explain how local government can invest the huge amounts of resources required to bring up our water supply to an acceptable level and to make sure that we have water in the future as climate change hits please do so.  Attacking without offering a plausible alternative is deeply, deeply disingenuous.

Student performance deterioration is not something that happens overnight.  Remember National’s cuts to night classes, and to literacy and numeracy programs so that private schools could receive a top up?  Remember Charter Schools, National Standards and class size increases?  Along with poverty and substandard housing the consequences of these defelopments are clearly being seen.

And speed reductions and attacks on the court system are typical populist attacks the right is renowned for.

Of course what is lacking in this relentless negative narrative is alternative policies.

And giving the Prime Minister $360 per week in tax cuts while a worker on the minimum wage gets $2.15 is going to create a huge fiscal hole in the Government’s accounts which mean that a future Government’s ability to adjust will be severely compromised.

I suspect we are going to see National’s approach for quite a while.  Relentless negativity and no idea of what they are  going to do.  Or how they will afford it.