No smoking gun but plenty of sunlight from Bridges tape 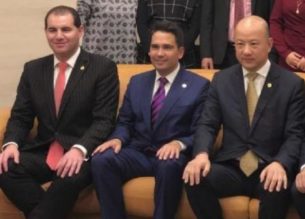 Rogue National Party MP Jami-Lee Ross’s recording of Simon Bridges has been widely characterised in the media as “no smoking gun”, but it sure as hell shines sunlight on myriad issues, especially the Chinese-National Party relationship.

While the tape does not have Bridges explicitly saying, “how do we hide this donation”, it is clear subterfuge surrounding donations is so routine within National that it doesn’t need to be stated.

If you go past his incomprehensible English, what Bridges is really saying is that he wanted to keep the money outside the National Party official channels. He mulls whether or not he needed to inform party president Goodfellow, who he was due to meet later that night.

Bridges discusses whether the $100k is enough to get Zhang’s business partner Colin Zheng in as a National Party candidate and whether there that wad of cash was enough to up Chinese parliamentary representation. This would be at the expense of Filipino or Indian representation and would come via those ‘useless’ dead-wood MPs like Findlayson, Carter, Wagner, or the “fucking useless” Pugh.

“You’ve only got so much space. Depends where we’re polling, you know… two Chinese would be nice, but would it be one Chinese or one Filipino?” says Bridges, to which Ross retorts: “Two Chinese would be more valuable than two Indians, I have to say.”

The casual racism is nauseating but more concerning is the question of influence.

Newsroom’s Laura Walters has written a revealing profile of Zhang Yikum, who despite speaking no English was, on Queen’s Birthday, awarded an MBE “for services to New Zealand-China relations and the Chinese community”. Zhang, who has deep ties to the Chinese communist party also has close links to Labour politicians like Andrew Little and Phil Goff, who was the recipient of substantial donations for his Auckland mayoralty campaign.

After moving to New Zealand in 2000, the now multi-millionaire started restaurant businesses, before expanding into property investment and food manufacturing. He has set up the Chao Shan General Association of New Zealand as a way to help support Chinese migrants, and foster relations between the two countries including promoting China’s Belt and Road Initiative in New Zealand.

He has been deeply involved in trade delegations between China and New Zealand and those activities have invariably involved high level contacts with officials from both the National and Labour parties.

In her book Magic Weapons: China’s political influence activities under Xi Jinping, Brady explains how the Chinese Communist Party uses the “United Front” technique to spread its influence. This means other organisations that are ostensibly separate from the Chinese state are used as proxies. So, in New Zealand, Brady contends that various Chinese expatriate community groups or newspapers have effectively been taken over by the Chinese government.

Since publishing her unwelcome research, Professor Brady has been the subject of a number of strange break-ins which prompted Prime Minister Jacinda Ardern to order New Zealand intelligence agencies to investigate whether China was involved.

Yesterday’s tape recording is also revealing about the murky business of how former Chinese spy Yang Jian became a National MP in 2011. Like Zhang, Jian has been a major donor to the National Party. Yang spent 15 years studying and working for a Chinese spy agency – the PLA-Air Force Engineering College and Luoyang Foreign Language Institute but we never got to the bottom of his links to the Chinese government.

Chinese soft power has been an even hotter topic in Australia where a government investigation by the prime minister’s office and the Australian Security Intelligence Organisation (ASIO) uncovered attempts by the Chinese Communist Party (CCP) to influence all levels of politics in Australia.

The investigation also looked into political donors linked to China. Head investigator, John Garnaut, a former senior adviser to former Prime Minister Malcolm Turnbull and a former China news correspondent, told a US Congressional committee that compared to Russian interference, China was “very good at it”.

“Unlike Russia, which seems to be as much for a good time rather than a long time, the Chinese are strategic, patient, and they set down foundations of organisations and very consistent narratives over a long period of time,” Garnaut told the committee.

“They put an enormous amount of effort into making sure we don’t talk about what it’s doing,” he said, adding that countries have “failed to recognise a lot of the activity that has been going on.”

Relations between Beijing and Canberra have since soured considerably.

Bhatnagar, a former Auckland City Councillor, was exposed in Nicky Hager’s book Dirty Politics as one of Whaleoil’s Cameron Slater’s inner cabal, who in 2011 was caught by IT commentator and blogger Russell Brown trying incognito to smear political opponents on Wikipedia.

Bhatnagar was also involved in an illegal hack of the Labour Party website.

National’s hapless hiding of a ‘Cathedral Club’ donation listed the donor’s address as Bhatnagar’s home so he had to admit to being the $10,000 donor. He described the Cathedral Club as “an informal pay-your-own-way dinner club that started in 2001, comprised of a small group of Young Nats and old friends from university days”.

The Cathedral Club, is like the so-called Cabinet Club, that was controversial through the term of John Key’s government because attendees, who paid large sums of money to attend were given access to ministers, including Key when he was prime minister. Key claimed he attended such clubs as an MP and party member but the Cabinet manual makes it clear minister MPs can talk about any portfolio matter.

In 2014, then Green Party co-leader Russel Norman damned such access “as fundamentally corrosive to democracy”.
Such a system gives wealthy people access to the halls of power. Yesterday’s tape reveals just how it works.

Ross, who interestingly has been advised by Dirty Politics actor Simon Lusk, claims the rationale for his expose of the donations scandal is that Bridges and National have lost their moral compass. Deputy leader Paula Bennett, when asked why Bridges has been involved at all in conversations with Chinese businessmen about donations to the party said:

“Because that’s his job. We fundraise.”

If that is what Bennett believes, Ross is utterly wrong – National has no moral compass.

(Simon Louisson reported for The Wall Street Journal, AP Dow Jones Newswires, New Zealand Press Association and Reuters and briefly was a political and media adviser to the Green Party)