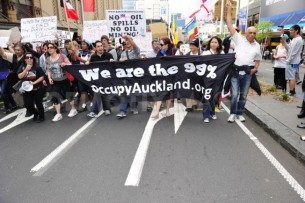 On Saturday events were held in six of our cities.  Accounts of numbers vary, but 3News puts the Auckland march down Queen St at around 3000, with about 100 camping out over night in Aotea Square.  RNZ gives lower numbers for Auckland, and estimates about 200 in Wellington at the Civic Square (intending to occupy for a week), and about 30 people in Hagley Park in Christchurch).

Here’s the website for Occupy Auckland, links to the groups in other centers are collected here. Occupy Aotearoa is on Twitter and Facebook, there are videos of Saturday’s events on YoutTube. The Herald sums up:

Thousands of well-behaved protesters occupied city centres around New Zealand yesterday, claiming our country is controlled by corporate greed.  The protest was part of a global movement following Occupy Wall St in the United States, where thousands gathered to oppose economic inequality.

Protests were held in six cities yesterday – Auckland, New Plymouth, Wellington, Christchurch, Dunedin and Invercargill – with the main message being that 99 per cent of communities were controlled by a greedy 1 per cent of people.

“This is about people being sick and tired of 99 percent of the people who create the wealth, not getting it and it all that wealth going to the one percent.”

It was also about the Rena – there was anger and frustration.  “It makes me very angry. And if we hadn’t allowed ships of convenience to come into New Zealand we wouldn’t be where we are with the Rena in Tauranga,” said one demonstrator. “The government action hasn’t been good enough in that respect,” said another.

The protesters are preparing to set up camp in Aotea Square for the next six weeks.

These New Zealand events are part of a worldwide phenomenon:

Protests inspired by the Occupy Wall Street movement in New York and the “Indignants” in Spain have spread to cities around the world.

Tens of thousands went on the march in New York, London, Frankfurt, Madrid, Rome, Sydney and Hong Kong as organisers aimed to “initiate global change” against capitalism and austerity measures.

There were extraordinary scenes in New York where at least 10,000 protesters took their message from the outpost of Zuccotti Park into the heart of the city, thronging into Times Square.