TVNZ’s latest Colmar Brunton poll is released at 6pm. This post will be updated with the results then. In the meantime, some context:

The June Colmar Brunton saw a 9% swing from Labour to National under the exciting new leadership of Todd Muller. However, if replicated on election day, it still would have seen Labour able to govern alone. The poll before that was even worse, with the Tories on 29% and Labour nearing 60%.

Feel free to have a guess at tonight’s result. Me, I reckon National’s vote will still be in the thirties. If it’s lower than that, Judith Collins will look like a busted flush, an idea whose time has come … and gone. 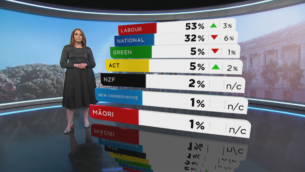 Good news for Labour and the new leader of the opposition, David Seymour. The defection of significant numbers of Nats to the Epsom Gun Club is a sure sign their voters know the game is up for the Tories.