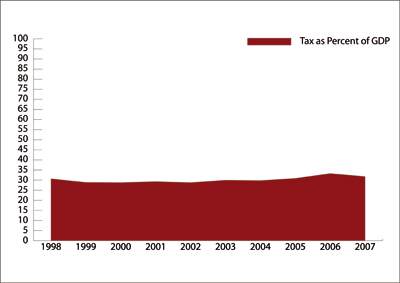 There’s a lot of talk on the right about the surplus being evidence of ‘overtaxation’. But where exactly is the Government’s huge tax grab? According to Treasury, tax as a percentage of GDP has barely moved since 1998 – when we had no Working for Families, no Cullen Fund, no Kiwisaver, virtually no investment in transport, no cheap doctor’s visits and prescriptions, no interest-free student loans, and no assistance for first-home buyers. That’s right, tax as a percentage of GDP has risen from 30.7% in 1998 to just 31.8% in 2007.

If there’s anything remarkable in these figures, it’s why a centre-left government hasn’t increased tax revenue even further as a percentage of GDP after eight years in power. One thing is certain – the surplus is not evidence we’re being overtaxed. So why aren’t National, the media and business crying out for more spending on public services instead?