I have loved it: Hekia Parata on her 5½ years as education minister

Hekia Parata thinks legacy is a “very kind of poncy term”. “It’s not why you get into public office,” the outgoing education minister says as she prepares for her last day in the role on May 1, after 5½ years at the helm.

But she is nonetheless proud in the belief that she leaves New Zealand with a better education system than when she started.

Parata can believe whatever brings her comfort of course (it’s very fashionable these days). But the fact is that this National government has made, as usual, a mess of education. Crucially and unfortunately, NCEA is in trouble. The best analysis recently is on Newsroom:

What PISA tells us about grade inflation in NCEA

COMMENT: The Government tells us that education is getting better in New Zealand. In Prime Minister Bill English’s election date announcement, he declared that National would be campaigning on their strong record in Government, including the fact that “more kids are staying at school longer and getting better qualifications”.

The NCEA numbers seem to back him up. Qualification attainment rates are higher than ever.

Yet the Programme for International Student Assessment (PISA), a three-yearly worldwide study by the OECD of 15-year-old school students’ educational performance on mathematics, science, and reading, paints a different story. (see Figure 2)

New Zealand’s PISA scores have been declining since tests started in 2000. Despite NCEA grades improving, actual standards in maths, science and reading have declined.

This strongly suggests that the NCEA qualification is suffering from ‘grade inflation’, where the actual standard signified by a given grade is declining. As with monetary inflation, the qualification is losing value. 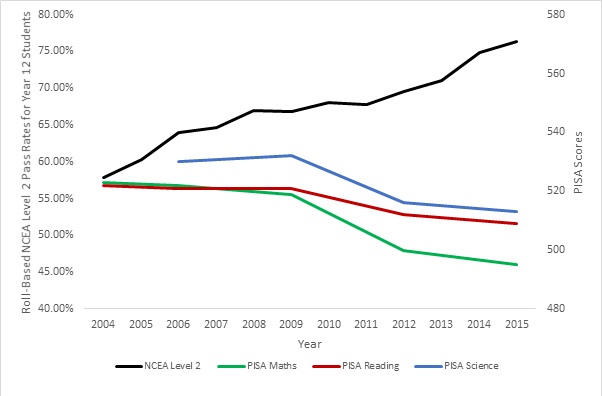 The Figure shows our own NCEA Level 2 pass rates vs results in the independent and international PISA schools (plenty more data and discussion making similar points in the article). NCEA goes up, independent measures go down. Unfortunately, it looks a lot like grade inflation. Teachers under mad levels of micro-managed pressure to pass more students – do so.

Further reading on the “better education system” that Parata leaves behind:

As far as success stories go, education is right up there with National’s record on housing and the environment. The Brighter Future is a disaster.