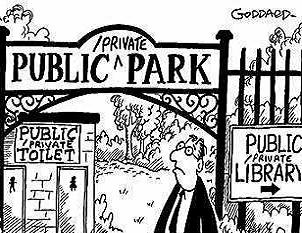 With echoes of the mining debate, the Government’s apologists on private prisons say ‘sure, in principle we shouldn’t do this, punishing criminals is the job of the state, but we’ve got to balance that against all the money we will save… money!!’ and we know that money trumps all for these people.

But do Public Private Partnerships (privatisation in rather tawdry drag) really save money?

The experience here and abroad says no.

The corporations know that the government will always bail them out. And that induces a predictable behaviour in profit-driven corporations: asset-stripping. There are numerous overseas examples of this happening. Here in New Zealand we only need look at the privatisation of rail. Fay Richwhite and Toll knew that they could run the rail system into the ground while creaming off super-profits, safe in the knowledge that the government couldn’t let a major piece of infrastructure collapse (what people forget is that rail, like roads, brings major benefits to the economy, not just the owner) and the govt would eventually step in and buy them out.

English has said that a PPP will have to beat the public cost by 10-20% for them to be interested. Seems fair enough, eh? But we know what happens. The corporations will happily tender as low as English needs them to. Bid low then under-deliver and over-charge, and what can the government do about it? It’s not like it can just walk away from paying for a prison housing 1,000 inmates.

The experience around the world has been worse outcomes for more money. The same thing will happen with prisons. The corps will run them into the ground until the government has to pay through the nose to take them over and get them running properly again.

To put it bluntly, when you rely on someone else to deliver something you need they’ve got you by the balls. And the profit motive gives them all the incentive in the world to squeeze.

From first principles, its hard to see why privatisation should save money. I mean, the State needs a job done, a service delivered. The State can do it itself, and pay all the costs. Or it can pay someone else to do it. They’re doing the same task, so they ought to have the same costs, plus they’ve got to earn a profit for their owners. Which is greater: Cost or cost plus profit?

And that’s what the privatisation argument boils down to. Right wingers (who are fundamentally just pissed off about paying tax) don’t like the government doing stuff. They are ideologically drawn to privatisation. To justify it, they invent privatisation pixie dust that magically creates savings that the public sector can’t. Unfortunately for them, the reality is that privatisation is a failure, a corporate scam, and they will end up paying, via their dispised taxes, along with the rest of us if privatisation goes ahead.