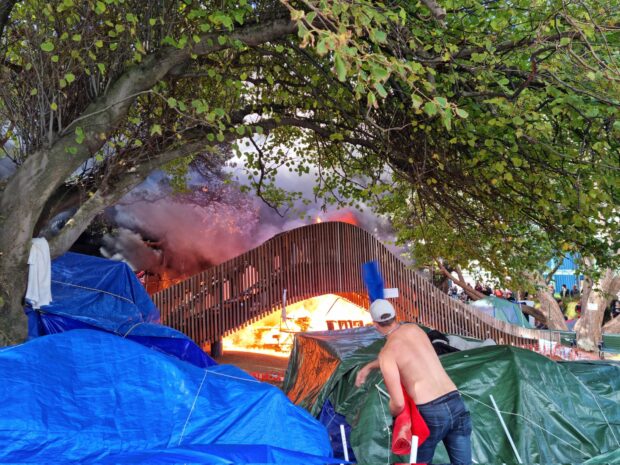 Martin Luther King once said “An individual who breaks a law that conscience tells him is unjust, and who willingly accepts the penalty of imprisonment in order to arouse the conscience of the community over its injustice, is in reality expressing the highest respect for the law.”

Noble words.  A principle exemplified by the actions of Rosa Parks amongst many others.

The Wellington protestors would also have you believe that theirs is a noble protest against the tyrannical excesses of an out of control government but I would beg to disagree with them.  There was no willing acceptance of police action, only incredulity that their defacing of our House of Representatives, the threats of violence against MPs and media and the blocking of a major Wellington street was responded to by police in a rather vigorous manner.

Their sense of PR was that bad it is almost as if Vladimir Putin has been advising them.

Torching a kid’s playground and a hundred year old Pohutukawa adds nothing to the cause.  All it does is piss off kids, parents with kids and tree huggers all in one go.

To then blame Antifa shows how far down the US rabbit hole some of them are.  There is no prospect of reconciliation with these people.  No sitting down for a chat and a discussion will help.  They exist in a different dimension.  Help is required.

To top things off a group of protestors has threatened to occupy Wainuiomata Marae.  From the Herald:

Residents appear to have repelled an attempt by some of the protesters who were moved on from Parliament grounds who then tried to occupy the Wainuiōmata Marae.

Tensions were running high in Lower Hutt last night as a group ousted from central Wellington tried to rehome themselves elsewhere in the region, targeting the marae.

Residents from the Lower Hutt community turned out in force, blocking the entrance to the site, putting up cones and even sitting in chairs across the driveway.

A police helicopter circled overhead and continued flying late into the night.

A post on Facebook suggested the protesters stayed in the community, and spent the night in the Remutaka Forest Park and at a temple.

Last night, Speaker Trevor Mallard weighed in on the resident blockade, saying he had spent some time at the marae on Thursday evening.

“My community is doing a better job of stopping the feral campers than I did,” he wrote.

Locals have successfully protected the Marae.  It was apparently chosen because it runs a Vaccination clinic.  “My body my choice” only appears to apply to those who reject the use of life saving vaccines, not those who want the benefit of the best medical technology.

The actions of the protestors is incredibly disrespectful and matches previous behaviour.  Earlier incidents where they served a trespass notice on Taranaki Whanui whanau in Wellington and their occupation of Ngati Whatua Orakei land in Tamaki Makaurau shows a hostility that is startling.  It is the level of disrespect that only a Nazi would be proud of.

The question has to be asked where do we go from here?  A section of our community need help.

239 comments on “Real protestors do not burn kids playgrounds ”