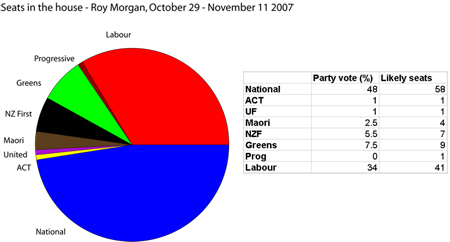 There’s a new new Roy Morgan poll out and it’s not good news for Labour.

“The recent plunge in support for the Labour Party follows the mishandling of the domestic terrorism case with the October 15 arrests of Maori activists in Ruatoki.

“Solicitor-General David Collins’ ruling on November 8 that the Government’s anti-terrorism law couldn’t be used to prosecute the activists because the law was ‘confusing’ and ‘incoherent’ reflects badly on the Government’s competence.

“The referral of the Terrorism Suppression Act back to the Law Commission for major re-working Ãƒ¢Ã¢â€š¬” effectively scrapping the current legislation, has brought into question Helen Clark’s ability to protect New Zealanders from the scourge of terrorism. The National Party has strengthened their vote to lead Labour by a massive 14%.”

I can’t say I agree with his analysis, as I haven’t seen anything to suggest the reworking of the Terrorism Suppression Act (which both major parties voted for) has caused anyone to doubt Helen Clark’s ‘ability to protect New Zealanders from the scourge of terrorism’. This sounds like an analysis written by an Australian with little understanding of domestic issues in New Zealand (they still insist on referring to National as ‘the Nationals’).

To my mind the fact that this result is so far out of whack with other recent polls suggests it’s a rogue, but we’ll have to wait for the next few polls to see if this is the case. Either way, it will certainly give Labour pause for thought and will give NZ First a welcome glimmer of hope.

It’s also interesting to see that while this poll puts National in the driving seat, even at 48% support they’d still have trouble forming a viable government.