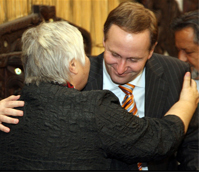 Tariana Turia has put out a press release today having a bit of a cry that Labour MPs have been calling ‘sell-out’ when she and Pita Sharples speak in Parliament. Clearly it’s hit a nerve.

Well, Tariana, if you don’t like to be labeled a sell-out, simple solution: don’t be a member of a government that’s cutting workers’ rights, doing nothing to protect jobs, gutting environment standards, taking away democracy in Auckland, cutting communities out of development decisions, and slashing education.

Resign in protest rather than support such decisions if you’re not a sell out. But no, you don’t do that. Instead all you can do is put out a press release* slavishly thanking John Key for donating two bottles of wine to your mates.

Seemingly alone among the Maori Party MPs, Hone Harawira remains connected to his and his party’s values, unwilling to sell-out for power:

I reckon that unless there is a balancing of the corporate action with the need to fight for social justice, that at some point in the very near future, some iwi are going to start copping flak from within their own ranks.

Mind you I also think the Maori Party is going through a very similar problem at the moment – but more on that story another time.

Hone clearly sees that the rank and file of the Maori Party are unhappy about their leaders’ corporate sell-out. Don’t expect Hone to continue burning his family’s mana for Turia’s ego forever.

Maybe Turia was confused. Perhaps it was Hone yelling “sell out” after all.

* [only on Newsroom, Scoop hasn’t bothered with it]