Selling assets to pay for tax cuts for richest 1%

John Key reckons he can raise $10 billion by selling our assets and their future profits. That’s probably very over-optimistic. But I got wondering, how does that one-off $10 billion compare to the cost of the tax cuts that National has given the wealthiest 1% of Kiwis, which they will continue to get year after year? Answer: not well.

Money now is worth more than money later – a bird in the hand is worth two in the bush. To calculate the present value of future money you use a fancy formula (already handily contained in this online calculator) and the discount rate, which is the interest rate. For the government, the interest rate it pays for borrowing is about 5.5%. Which, it turns out, means $10 billion now is worth the same as $550 million each year forever.

Now, how much less tax are the wealthiest 1% of Kiwi taxpayers paying as a result of National’s income tax cuts in 2009 and 2010? IRD’s stats tell us the wealthiest 1% earn over $165,000 of taxable income. They also tell us how many taxpayers are in each band of $5,000 and how much taxable income each band has – allowing us to work out the average income of each band. We can then work out the tax cut for the average income in each band, times it by the number of people in each band, and get a grand total.

And they’ll keep on getting that $586 million every year. In fact, the size of the tax cut for the top 1% will grow with their incomes – but erring on the low side and just leaving it at $586 million a year, how much is that worth in present value using the government’s discount rate?

And this is an extremely generous calculation because I haven’t counted all the dividends we’ll lose if Key sells our assets. In fact, that alone, according to Bernard Hickey and others, makes the present value of Key’s plan less than zero.

This means that, if debt was really a concern, National could simply restore the taxation for the wealthiest 1% of New Zealander’s that they were able to live with very well before 2009 and raise more money than asset sales might and we get to keep our SOEs’ profits. Only people on incomes over $165,000 would be affected. The other 99% of us get to keep the assets, the profits from them that pay for our schools and hospitals, and our sweet, sweet tax cuts.

Now, some of you are saying ‘yes, Marty, but the government needs the money now, not in $586 million blocks every year forever’. To which there are two answers: 1) we wouldn’t be getting the asset sale money for years anyway because these things take time to organise, indeed the deficit will be all but gone by the time these sales are ready to happen 2) ratings agencies can do the maths too, they know that increasing the government’s revenue by $586 million per year every year is more than getting a one-off of $10 billion.

Why do you think National is determined to sell assets when undoing its own tax cuts for just 1% of the population would be so much easier and more beneficial to the country in the long-run? Could it be that this isn’t about debt at all?

Could it be that debt is just the excuse they came up with so that the rich can keep their enourmous tax cuts and buy our assets cheaply? 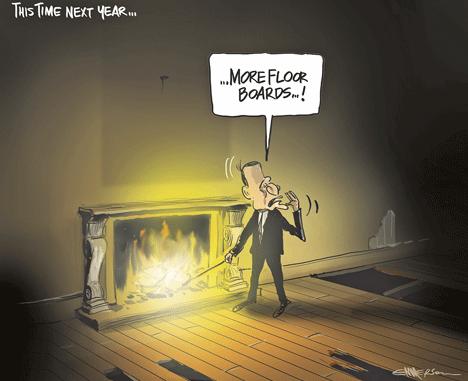 The thing I note about this picture: it’s the whole households’ floorboards but only the rich guy in the suit is being kept warm.