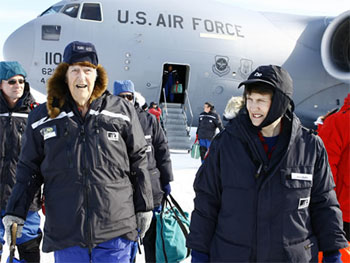 From the Sunday Star Times:

A new poll suggests that National Leader John Key may be up against a bigger obstacle than he thought in knocking Prime Minister Helen Clark off she is the person New Zealanders most admire after Sir Edmund Hillary.

The much-loved mountaineer topped the Roy Morgan Poll with 17.4 per cent support, followed by Clark on 15.1 per cent.

NB: photo is of Sir Edmund Hillary and Prime Minister Helen Clark arriving in Antarctica for the 50th Anniversay of Scott Base, Jan 2007