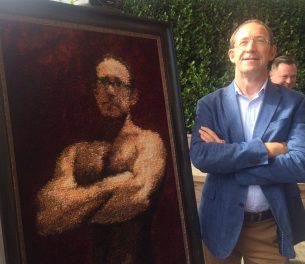 Jon Stewart on the Republican plan

“The Republicans appear to have a very clear plan for America…” Stewart on fire and funny.

‘Allo, Allo, Allo, Allo –  Based on the 1980’s Comedy Series, “Allo, allo”  – Starring Cameron Slater as Rene and Judith Collins as Edith. Episode Three. (See previous episodes)  “Cameron Slater gets starring role in tvnz drama” “Key schemes with media at whaleoil cafe“ By Susan Nact  It is just before opening time at the […]

Where the fuck is Webb Ellis

About now or very shortly, Trevor Mallard and Cameron Slater should be dismounting from the cycling race that has obsessively awaited by the right on the blogosphere. I’ve been aware of that this ‘political’ event was going to happen because of the frequent waffling that shows up on posts from the right. But it was nice day – I went along to exercise the car and to see the start.

Tucker’s law (not at all suitable for those offended by strong language).

The day there was no news

Daily Show on the Pollies

The Daily Show’s John Oliver goes behind the scenes at the Pollies, the US awards ceremony for political ad consultants. Hilarious. Watch the nominees tell Oliver how to destroy hope, make voters fear black people and hang your fragile ego on a yard sign. I’m sure our mate John Ansell would feel right at home. […]

Who do you want answering the phone?

Just received this parody of Hillary Clinton’s 3am ad, but with a New Zealand twist. Very funny.

Greenwoman just flicked us this:

The Climate Science Coalition is the last of a dying breed; a rabid, climate change denying lobby group. Of late, they have been performing a desperate, last-ditch attempt to slow the introduction of a carbon trading scheme. And, now, it looks like they’ve received some heavy-weight support in the form of the venerable Flat Earth Society:

A reader’s just sent us the lyrics to the song sung at Labour Party social and again at the conference as reported in The Herald today. We understand they were penned by Grant Robertson, Labour candidate for Wellington Central. To the tune of “The Gambler“: John Key – The Gambler On a warm summer’s evening […]

Too stupid for words

I’m not usually big on the Bush-bashing, but this is classic: Say what you like about Reagan, at least the dude could read from an autocue. Hat tip: onegoodmove

From the Sunday Star Times: A new poll suggests that National Leader John Key may be up against a bigger obstacle than he thought in knocking Prime Minister Helen Clark off she is the person New Zealanders most admire after Sir Edmund Hillary. The much-loved mountaineer topped the Roy Morgan Poll with 17.4 per cent support, followed by […]

Our sources tell us National is set to follow-up to last year’s DVD â€˜John Key: Vacuous for New Zealand’ with its sequel â€˜John Key: I won’t bite, promise’. â€˜Vacuous’ was withdrawn after The Standard and Kiwiblogblog revealed that Key had illegally used Coldplay’s â€˜Clocks‘ as the theme tune. National and Coldplay’s record label are reported […]

That’s what Key said when asked about his plan to increase GP fees. A reader reckons Key’s planning to apply the same market logic to crime: Great cartoon. No wonder National’s Law and order Spokesperson, Simon Power, is distancing himself from Key’s policy.

Clarke and Dawe on the sub-prime crisis

Steve posted a stick-figure explanation of the sub-prime mortgage crisis earlier in the week. Here are ABC commedians Clarke and Dawe giving their take:

Oh dear. It started with Roger Douglas and now political ad-man John Ansell has got on board the ACT train to electoral oblivion as well. Ansell’s most famous work to date is the National Party’s racist iwi/kiwi billboards of the 2005 election but our sources tell us his stocks dropped considerably with the party after […]

Earlier this week a reader drew our attention to Michael Hansen, a candidate in the recent local elections who drew 423 votes in Christchurch’s Spreydon/Heathcote community board on the Sabotaged truck under labour ticket. Intrigued, I did a bit of digging, and it just gets better. It turns out Hansen also stood for city council, […]

Dream of sliding to work?

Google have just opened a new European engineering headquarters in Switzerland, according to a report from the BBC: “Dotcom companies were defined by beanbags and pizza but Google, a company that came to prominence after the bubble had burst, has taken that image to a whole new level. Meeting ‘pods’ in the style of Swiss […]

Ben and Jerry’s icecream endorsed Obama when Edwards pulled out. To celebrate Obama’s win in Vermont, Slate recently ran a competition to name an icecream in his honour. The winner? “Yes, Pecan!”.

Some free publicity for the NBR

Speaking of humour, that joke of a newspaper the NBR has had a crack at us again. According to them The Standard is “a blog which tests Labour lines in advance”. So much for the NBR’s self-lauded connections: we don’t test Labour’s lines, we write them with Mike and Helen in a secret bunker under […]

Tomorrow – â€˜Slavery: it wasn’t so bad when you think about it’