So much for ‘ambitious for New Zealand’

A new report says that building the half a billion worth of new trains for Auckland in New Zealand would boost GDP by $250 million, improve our current account deficit by over $100 million, add $70 million to government revenue, and create 1200 skilled jobs. The Rail and Maritime Workers Union says its members have the capacity and experience to do the work in Dunedin and Lower Hutt. But the Government has put the kibosh on the idea. They just want the cheapest price for the rail cars, and that means going overseas. 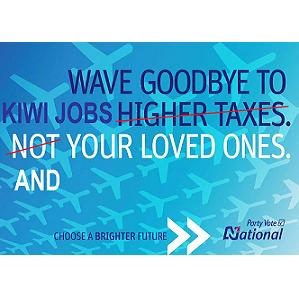 Going for the cheapest tender might make sense if the bidders are all in New Zealand or the tender is a private company. But this is a government that is supposedly committed to growing the economy. It should be willing to put its money where it’s mouth is and support New Zealand industry. Steven Joyce says it doesn’t make ‘commercial’ sense for Kiwirail to buy the trains in New Zealand where they will be more expensive, but that’s not the point. He should be looking at what makes economic sense: not what’s best for Kiwirail’s bottom line but what’s best for the country.

Joyce reveals his contempt for this country and his inability to see beyond simple commercial decision-making to a larger economic vision when he says “New Zealand isn’t very good at heavy industry”. He may as well have said ‘Kiwis can’t do this’.

The fact is, we used to be good at heavy industry until men like Joyce decided it would be cheaper to get others to do the work and New Zealand would just borrow from overseas to buy manufactured goods from abroad. The capacity is still there for New Zealand to do this work. We’re still building and refurbishing rail cars in this country, but not for long if the Government maintains its penny wise, pound foolish attitude.

Sure, it will be a bit more expensive to the government’s company but the gains for the economy that this government is meant to be rebuilding would be enormous.

On a deeper level, this illustrates the flaws in the commercial model of state asset ownership. By only looking at the cost to Kiwirail and ignoring the wider benefits, the Government is actually creating wider costs for itself – lost taxes and higher benefit payments for starters.

The same goes for the Government’s attacks on Kiwirail in general as an unprofitable ‘worthless’ asset. That’s only true if you look at Kiwirail as a company in isolation and ignore the tremendous benefits the wider economy gains from having a rail network. We don’t value the State highway network on the basis of how much it would bring in if it were sold but on the value it creates to the economy, and the same approach should be used for all pieces of critical national infrastructure.

If we had a government with some vision and some economic prowess, then backing Kiwirail to build their new stock in New Zealand would be a no-brainer. But this is a government of small time businessmen, not economic leaders. They don’t understand how to manage an economy and promote New Zealand industry. They can only look for the cheapest deal in each individual transaction, a small-minded approach that leaves us all worse off in the end.

161 comments on “So much for ‘ambitious for New Zealand’ ”