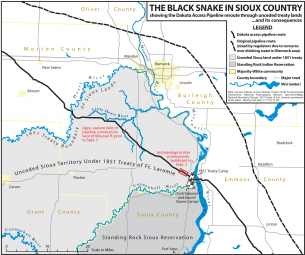 In the past few weeks week there has been a surge of activity in and around the Standing Rock water protector movement, and an explosion of coverage both in the MSM and on social media. I wanted to write a more in-depth post, but so much is happening it’s hard to keep up. Instead here is an update on the recent issues and events.

The militarisation of police is being noted constantly. This isn’t local police making sure that everyone remains safe, it’s an upscaling of local law enforcement to military level, including weapons and vehicles as well as bringing in out of state units and the National Guard. As far as I can tell the National Guard is for emergency situations, and there’s been some stretching of definitions to allow the State to define this as an emergency.

Law enforcement continue to arrest the water protectors in what appears to be intentionally intimidatory ways. Protectors can choose whether to engage in actions likely to lead to arrest or avoid those ones, but police are increasingly targeting the legal protests as well as the civil disobedience ones, and across the board are using inflammatory tactics. There are now multiple reports of breaches of process and probably law by police. These include arresting and charging clearly identified journalists, legal observers and medics, some of whom were also attacked.

Protestors are reporting being arrested on misdemeanour charges and then being stripped searched. One woman talked of being kept naked overnight in a cell, others have told of being made to stand naked in front of male offices. Many were kept in dog kennels with concrete floors. There are reports of water boarding and other violence against arrestees.

It is hard to see these acts as anything other than intentional in their execution. There is the feeling that the acts are designed to not only humiliate but to provoke reactions so that the protestors can then be portrayed as violent, with all the attendant white supremacy mythologising that goes with that – see, crazy, primitive Indians who are really violent when it comes down to it. The problem for the oil protectors is that this is a peaceful protest. People going out to the frontline actions are being trained in non-violence. This doesn’t mean that there are no instances of reaction, feelings are understandably running high, but instead that the ethos of everything that is being done there is peaceful resistance.

The charges are often out of proportion to the actions of the protectors, and the bonds required are costing huge amounts of money. Many of these charges will be disputed and then dropped, but in the meantime the money still has to be put up and the time used to sort it out.

There have been several instances of private security personal trying to provoke violence. At one of the front line protests a woman was pushed into the police line by a man later identified as an infiltrator. One woman tells of being targeted by police for trying to protect women and elders during an action. Also targeted are those trying to de-escalate confrontations.

Earlier in the week a man was stopped while driving fast towards the camp. He abandoned his vehicle and then raised his rifle at the people trying to stop him from getting closer to the camp. He was later arrested by Bureau of Indian Affairs police. One night there was a scrub fire on the hill above the camp. Night time camera gear suggests that this was intentionally lit.

The big action in the past week was the occupation of unceded Treaty 1851 land. One of the roads and a bridge were blockaded to prevent DAPL from progressing. Prayer sites were set up and elders engaged in prayer. This is the equivalent of church and for a country like the US the freedom of religion issues are paramount. Eventually people were pulled from prayer ceremonies and religious tools were impounded, to be then dumped on the ground at the camp a week later.

During the arrests, protestors were maced, tear gassed, shot at with rubber bullets (sometimes at close range), and sound cannoned. Horses were also shot with sub-lethal rounds, some badly enough that they had to be put down. Medics onsite are reporting multiple injuries including broken bones, as well as trauma and shock and increasing rates of triggering of PTSD for people who already have a history of being attacked violently.

Just prior to this time the FAA imposed an 11 day no fly ban over the area, which meant that the protectors were unable to use drones to film the police actions or anything that DAPL were up to. This ban has now been lifted due to legal action by the tribes, but again the tactic here is to delay and tie up resources and use the black out timing.

Despite all this, people are reporting more than the contention. Spirits have lifted this week and the number of people at camp has doubled. Women are talking about the positive impact on their children of living in traditional community and being part of something critically important to their tribes.

Out in the world things are starting to move too. The UN are now investigating human rights abuses, and Amnesty International are sending in observers. Berine Sanders wrote an open letter to President Obama asking that he finally take action (not unreasonable given Obama’s assurances to Native peoples 7 years ago).

This week a viral campaign on Facebook involved 1.5 million people over several days, and there have been multiple instances of infrastructure being shut down by solidarity protestors elsewhere in North America.