Surplus 2014/15: an excuse for not doing what needs doing

John Key’s excuse for the planned veto of the extension of paid parental leave is that it would put the 2014/15 surplus at risk.

There’s four answers to that: 1) if you believe Treasury’s numbers, there still would be a surplus, 2) Treasury’s margin of error on government spending and revenue is hundreds of millions per year, which is much larger than the $66m surplus they’re projecting or their projected $55m annual cost of extending the paid parental leave, 3) you could just delay the extension for a year to be ‘safe’ and 4) most importantly, why is going just under or just over some arbitrary line in the Crown’s books the Nats’ one aim for the economy? The truth is, Key’s using the surplus as an excuse for not doing the right thing.

Farrar was praising Key yesterday for getting being on track to surplus but so what? Being in surplus is the easiest thing in the world if it’s all that matters to you – just spend less than you take in. If you don’t care about anything but spending less than you take in, that’s simple – just cut shit until you’re in the black. But, as you know from your own household budget, there’s instances where spending a more than your income is the best option.

The extension to paid parental leave (and, for that matter, the home insulation scheme that also looks set for the chop) are perfect examples of Key putting getting just, just over that surplus line ahead of things that really matter.

Let me put in a graph for you visual types: here’s the debt/surplus and net debt forecasts without and with the extension of paid parental leave 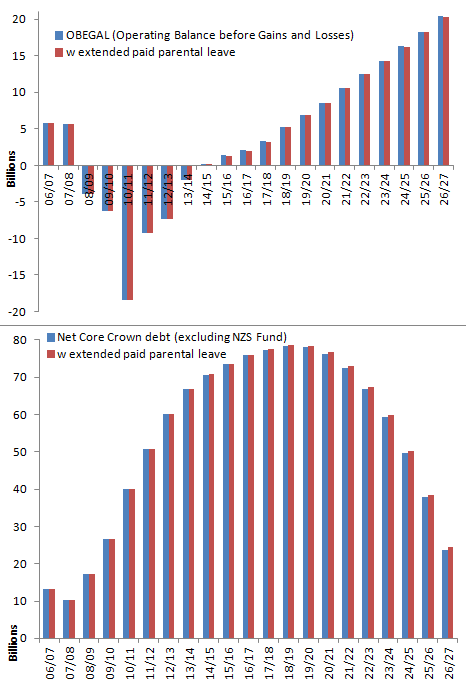