Media crisis may be most problematic

The government is simultaneously grappling with the Covid, economic and housing crises, but its failure to act urgently and boldly on the crisis in our Fourth Estate may have the most damaging longer-term effect. Bernard Hickey has lashed out at Broadcasting and Media Minister Kris Faafoi and Jacinda Ardern, for their fiddling-while-Rome-burns response to an industry in meltdown.

New Zealand, like many other nations, is hurtling towards economic depression faster than Covid-19 spreads. “We are going to have a depression”. “This is like an asteroid hit the global economy”. “We can print our way of this”. Reflections on what lies ahead by Simon Louisson, Bernard Hickey and others.

Being compared to Trump has got to hurt. And shouldn’t there be consequences when a PM flat out lies to the country on the state of the economy?

Hickey’s chart of the week 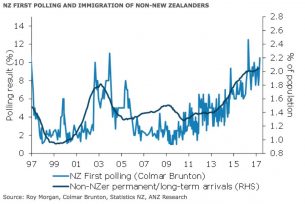 Hickey on surpluses and Key’s bullshit

Bernard Hickey: “It is extraordinary for the Prime Minister to call the Treasury’s short and long term forecasts a “load of nonsense” and yet rely on the medium term ones to promise all manner of riches to voters on the eve of an election.”

Hickey on immigration and wages

Hickey: “The best way for an economy to grow is for the market to allow wages to grow. Allowing a flood of low-skilled migrants is frustrating that market mechanism with the short-term aim of keeping wages low for employers.”

An elegant graph explains why free trade is a good thing, but why it is causing a backlash in rich “Western” countries.

Hickey: “Helping employers to bring in low-skilled migrants instead of investing in new technology and becoming more productive so they can pay local workers more is essentially stunting our productivity and real GDP per capita.”

“Mr Hickey said the actual figure for foreigners buying homes here could be anywhere between 3 and 48 percent.”

Hickey on the UBI

Quantitative easing for the masses

It seems that “serious economists” are discussing something called “helicopter money”. Would it fly in NZ?

Bernard Hickey’s piece from last Sunday on Auckland Housing is a depressing read.

Hickey on the living wage

Excellent piece by Bernard Hickey in The Herald this morning.

Bernard Hickey asked such an interesting question on Twitter that it’s worth a post and discussion here. When and how will the young revolt?

Nats have held us back for four years

We’re in yet another round of talk of “green shoots” of economic recovery, complete with the hype of an optimistic budget. Maybe they’re right this time, but the recovery, when it does happen, will be in spite of the National government, not because of them. All National have done is hold us back for four years.

Recent pieces by Bernard Hickey and John Armstrong both highlighted the problem of our aging population and the unsustainability of super – in Hickey’s memorable words we are “consuming our future”.  Armstrong tries to balme MMP, but that won’t wash, it’s just the usual short-sighted Nat stupidity…

NZ is well served in the range of online offerings that are exploring beyond the fringes of the mainstream media. Welcome to a new player, Bernard Hickey’s JOURNALISM.ORG.NZ.

The “tradeable” sector is still shrinking. The property market is heating up again. We need a capital gains tax now.

Bernard Hickey has a great piece in the Herald on Sunday that you shouldn’t miss.

Capitalism is good. Globalisation is good. It’s political orthodoxy. But is it matched by economic reality? Perhaps not. Recent pieces by Bernard Hickey and Gordon Campbell give us plenty to think about…

The credit rating downgrades have been quite a political earthquake, and the aftershocks are going to continue for some time.

Hickey on the fall of capitalism

Bernard Hickey writes compellingly on the coming fall of capitalism.

No future in NZ?

John Key was elected promising to stop the exodus to Australia. He has failed.  More and more Kiwis, especially the young, are leaving.  And is it any wonder?

If only smiles were dollars

The minor party debate on Q+A was very interesting. Rahui Katene was self-contradictory and vague, like the Maori Party always is. Peter Dunne was pathetic. Roger Douglas slammed the government’s borrowing as did Russel Norman, who pointed out the other three had all voted for National’s debt-increasing tax cuts for the rich.

On Hickey on tax cuts

Bernard Hickey sets out the “theory” behind National’s tax cuts, and sums up the impact of the tax package as a whole: “Simply put, it’s not working”.

Why isn’t it working?  Well the fact that the theory is nonsense probably doesn’t help…

The latest piece from economist Bernard Hickey is a despairing warning on the subject of borrowing.  With the current government making things worse not better, is there any way out of this downwards spiral?

Hickey on the tax bludgers

Bernard Hickey looks at the tax bludgers. Labour’s plans to introduce a higher new top tax rate would raise needed tax from those who can most afford it. But it would also foster more tax bludging by the rich. Rather than throw the baby out with the bathwater by abolishing the top rate, we need to eliminate the avenues for bludging.

Financial journalist Bernard Hickey of interest.co.nz and Selwyn Pellett of the Productive Economy Council will discuss the need for a complete rethink of our approach to economic policy Monday evening in Wellington at Connolly Hall at 5:30pm. Besides writing regular opinion pieces and providing information on his site, Bernard Hickey writes a regular column in […]

The US Government has begun creating new money out of thin air, to inflate away the value of its debt and lower its currency to make its industries more competitive. It’s not the only country. Nearly all the major currencies are engaged in the ‘Currency Wars’, trying to force down their exchanger rates. We’re in the cross-fire doing nothing.

Hickey on fighting the currency war

Bernard Hickey continues his politico-economic rebirth. Yesterday, he wrote on how New Zealand can protect itself from dangerous international capital flows that undermine our economy and our ability to choose our own path. We shouldn’t leave the guidance of our economy to the invisible hand of blind, fallible, and valueless markets.