If only smiles were dollars

The minor party debate on Q+A was very interesting. Rahui Katene was self-contradictory and vague, like the Maori Party always is. Peter Dunne was pathetic. Roger Douglas slammed the government’s borrowing as did Russel Norman, who pointed out the other three had all voted for National’s debt-increasing tax cuts for the rich.

I might put up some of the transcript once it comes through, but the important points on National’s economic failure were also hit by Bernard Hickey and the Herald editorial today.

Hickey says that National will try to take focus off the record deficit by pointing to strong growth projections:

New Zealand will probably avoid a downgrade in our credit rating because the Budget’s economic growth figures for the next three to four years will look extraordinarily strong.

They will argue the Christchurch earthquake rebuild and a historic boom in commodity prices will power GDP growth to more than 4 per cent over the next two years.

This seems sensible until you look at the track record of these forecasts in the past three years since the global financial crisis.

Every economic forecast by the Treasury underestimated the impact of an epic change in the way New Zealanders think about debt and spending.

That’s why we should all take Thursday’s growth forecasts – and Key’s smiling confidence – with a grain of salt.

Granny’s patience with Key’s bland smiles and big promises is wearing thin too:

In an interview John Key gave to the BBC when he was in London for the royal wedding, Key smiled a lot and insisted that the expert independent commentary about the crises we face was “just people’s opinions”.

That’s a politician’s job – to put a brave face on it. Deep down, Key knows the shape we’re in. But he seems to lack the political will to do anything about it.

Act leader Don Brash, whose public pronouncements have so far been conspicuously devoid of specific policy, got one thing right in his open letter to Key this week: the PM, he said, is frittering away “the greatest reserves of prime ministerial popularity in New Zealand history”.

It’s not too late for Key to prove him wrong. But time is certainly running out. 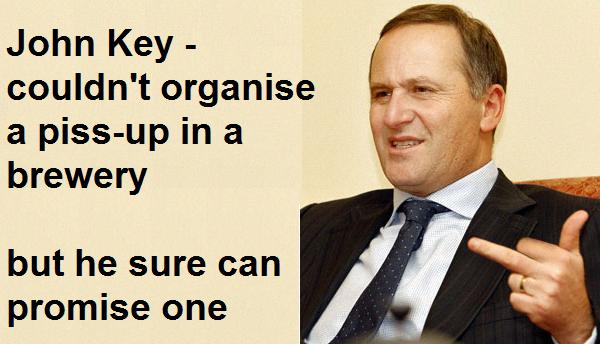 38 comments on “If only smiles were dollars ”