Another Nat scandal to add to the list. Rob Salmond demolishes Bridges.

“The shrillness of the “hey look over there!” narrative coming from the right-hand-side shows just how deep the embarrassment within National is at the Northland campaign and result.”

Key ran out on failed candidate Mike Osborne in Northland, just like he ran out on Melissa Lee in Mt Albert.

Twelve mistakes National made in Northland

There are many specific reasons why National lost Northland, but arrogance is the thread running through all of them.

Steven Joyce is adamant that Northland was unique and what it really needed was improved infrastructure such as roads and broadband. Joyce has a narrow, blinkered view of the world. Sadly the election defeat didn’t remove his blinkers or open his eyes to look at Northlands real needs.

A selection of the wit and wisdom of Twitter tonight. Compare and contrast the Labour and National leaders.

A post to allow for the discussion of the Northland Buy Election result. 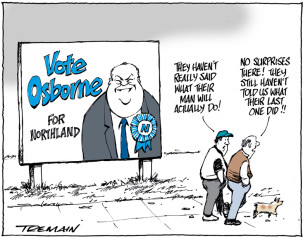 Stuff: “Peters says that over the next 48 hours the only thing National voters want from Key is an explanation for why they’re having a by-election in the first place.”

It looks to me like the early voting for Northland is likely to be close to or more than 50% of the total vote. Part of that is because it is a by-election. Part because of National’s hapless and tainted candidates (past and present) going against effective opponents. But also due to the strong trend to early voting. It will need to cause changes in electioneering.